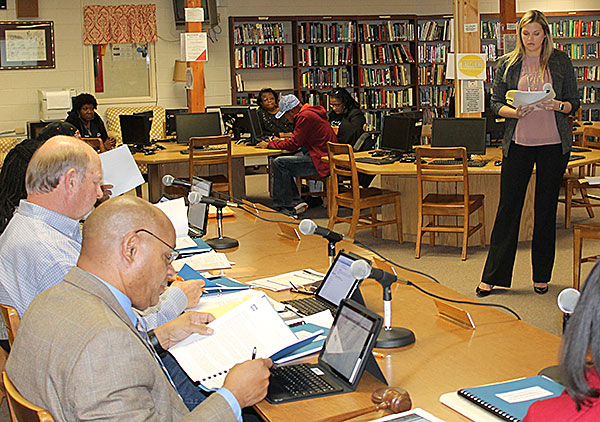 AUDIT REPORT – Marcie Williams (standing), of Alexander Thompson Arnold, CPA, goes over the audit report of Humboldt City Schools during last Thursday’s school board meeting. Williams said the report was good with only three minor findings. Board members seated at the table look at their reports as Williams reads through the high points of the audit.

The first meeting of the year for the Humboldt School Board got off to a rocky start. The simple task of electing a chairman, vice chairman and TLN representative soon became difficult.

As the first item of business, board chairman, Terry Johnson, bypassed seeking nominations for chairman. Instead, he made the motion for Leon McNeal to be chairman, but no one seconded his motion. After a rather lengthy pause, Johnson called for a vote at which time other board members said there was no second.

McNeal then seconded the motion. The vote was 2-2 with Johnson and McNeal voting yes, and Valeria Wedley and Wayne McLemore voting no. With no majority vote, the motion failed.

Wedley then announce she would like to keep things the way they are.

Central Office secretary, Cindy Love, gave the board members a sheet from the Tennessee School Boards Association with information regarding tie votes. The question, “What happens if there is a tie when electing a board chairman?” was one of the question and answers on the TSBA sheet.

The sheet stated, “The board continues to vote until someone receives a majority vote. The board may decide to continue with the current chair until the issue is resolved or may elect a chairman pro tem as a temporary solution until a permanent chairman is elected.”

Johnson, again called for another vote in favor of McNeal. The board said that vote was over and cannot be called on a second time.

McNeal then said he would withdraw his name as a candidate for chairman. He then stated once the vacant board seat is filled, the full board could elect the positions.

Wedley said that was not what her motion was for. She did not want to have a temporary chairman. Instead, she wanted the board to remain the same. She then revised her motion to nominate Johnson as chairman, which was seconded by McLemore.

Johnson was re-elected as chairman, 3-0. Johnson did not cast a vote for himself.

Next was the election of the vice chairman. Once again, Johnson nominated McNeal. After another pause and no one seconding the motion, McNeal seconded so discussion could be held at which time he withdrew his name again and asked someone else be appointed.

McNeal noted he would fight for the schools and the kids.

At that time, Wedley announced she preferred not to be vice chairman. That left only current vice chairman, McLemore, as the only viable candidate. Johnson motioned to nominate McLemore as vice chair and was approved unanimously.

With all positions filled, the board moved forward through the agenda.

The board quickly moved through approving the 2019 board meeting dates. The dates listed did not include a December meeting. At the end of last year, the board opted to forego holding a December meeting due to a short month, a busy holiday season and little activity due to Christmas break.

Thursday night the board approved the 2019 dates but left it open to make a decision whether or not to add a December meeting to the calendar next November.

Williams went over the financials for the schools first and where various monies were spent, including a substantial amount for construction and renovations.

McNeal asked Williams how much was spent on education and the kids, not the construction. Williams fingered through the report and quickly figured what was spent on renovations and what the remainder was that was used to operate the school system. Of the $14 million, about $3 million went toward renovations, leaving the remaining $11 for education.

Next, Williams went over the three findings at Humboldt Jr./Sr. High School but said they were common among schools. This was a big change from last year’s audit that showed seven findings, some of which Williams called severe.

The second finding was for collections in the amount of $2 and $1 respectively. Williams said this was not done intentionally but controls should be there and all money should go to the bank (within the designated time).

The third finding dealt with commission revenues. Williams said this finding reportedly had been reconciled.

The board unanimously approved the audit report.

•The board unanimously approved the bid for a laptop cart.

Director of schools, Dr. Versie Hamlett, said this is for the 1-to1 program—one laptop for one student.
Wedley asked if this is the type of cart where all the laptops plug into it? Dr. Hamlett answered, yes.

“We need them,” Wedley said.

BGC Systems was awarded the bid at a price of $28,624. Technology director, Wayne Sheehan, said 11 companies requested bid specs but BGC was the only one to submit a bid.