With a packed house on Friday, the No. 6 ranked Gibson County Pioneers missed opportunities to stay atop the region, losing 30-22 to Union City at Yates Field.

Gibson Co. started its opening drive with back-to-back runs by running back Ozzy Rico for a first down, moving the ball to the 38-yard line. Caden Wylie, on a 52-yard blast down the left field sideline, moved the ball to the 10. With 6:09 left in the first quarter and facing fourth down and five, quarterback Payton Lamberson completed a 5-yard pass to Camron McMackin for a touchdown with Will Cantrell running in the two-point conversion to give Gibson Co. an 8-0 lead.

Union City answered with running back Treyvon Westbrook scoring a touchdown. Sam Theobald, with a quarterback keeper, converted the two-point conversion to tie the game at 8-all with 2:14 left in the first quarter.

Gibson Co. turned the ball over on its next drive on fourth down at the 31-yard line with 1:21 left in the first half, but Union City fumbled on the first play of the ensuing drive. Will Cantrell recovered it at the 37-yard line. Gibson Co. wasted no time and scored a touchdown on a double pass from Caden Wylie to Hayden McGuire for 37 yards with 48 seconds left in the first half. The two-point conversion failed, and Union City led 22-14 at the half.

Union City scored a touchdown on a long run by Westbrook to start the third quarter with Westbrook also converting the two-point conversion to extend his team’s lead to 30-14.

Gibson Co. started its next drive on the 23-yard line. On first down, Lamberson scrambled and broke free for a 77-yard touchdown that was called back for a holding penalty, and Gibson Co. was forced to punt. Noah Stafford kicked his career longest 69-yard punt to back Union City up to the 13-yard line.

Union City managed the clock for most of the fourth quarter, but with 1:46 left in the game, Union City turned the ball over on fourth down at the 44-yard line.

Lamberson connected with McMackin on back-to-back passes to the 12-yard line. Two plays later, Lamberson ran the ball in for a 12-yard touchdown and also converted the two-point conversion to make it 30-22 with 56 seconds left in the game. Gibson Co. tried an onside kick, but Union City recovered the ball to end the game.

Gibson Co. had 250 total yards of offense with 163 yards rushing and 87 yards passing and 19 first downs. The Pioneers were penalized five times for 43 yards.

Seniors Noah Stafford and Caden Wylie were named the Pioneer Players of the Week. Stafford had three tackles and four punts for 175 yards, averaging 43.8 yards a punt. He also kicked his career longest punt for 69 yards. Wylie had three carries for 41 yards and completed a pass for 37 yards with a touchdown. See GCHS Scoreboard sponsored by Subway.

Gibson County Pioneer football, cheerleaders, band and all fall sports seniors will be honored in a pregame ceremony during the Pioneers’ last home game Friday at 7 p.m. against Trinity Christian Academy.

MOFFATT  STOPS – Guy Moffatt stops the Union City running back short of a first down. (Photo by Lori Cathey)

YOCHUM THROWS FOOTBALL – During a timeout in the first half, Gibson County cheerleader Sydney Yochum throws a football to a Pioneer fan. (Photo by Lori Cathey)

TOUCHDOWN – Pioneer Hayden McGuire goes up to catch a pass from Caden Wylie for a 37-yard touchdown with 48 seconds left in the first half. (Photo by Lori Cathey)

STAFFORD MOVES HIS MAN –Noah Stafford (21) puts a move on Union City’s offensive lineman to go after the ball for a loss of yards. Stafford was named the Player of the Week. He had three tackles and four punts for 175 yards, averaging 43.8 yards a punt. He also kicked his career longest punt for 69 yards. (Photo by Lori Cathey) 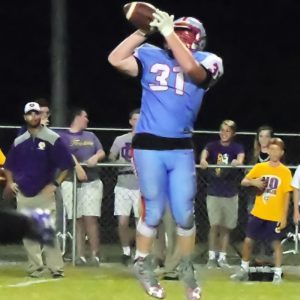