On fourth-and-goal with four second on the clock, the Pioneers refused to let Peabody running back Jarel Dickson break the plane and put him on the ground shy of the end zone for one of the biggest wins in Gibson Co. football program history. The play capped a remarkable nail-biting and hard-fought game between the two longtime rivals.

Friday’s victory moves Gibson Co. into first place in region 7AA with a 3-0 record and a 6-1 overall mark.

After a scoreless first quarter, Gibson Co. cornerback Camron McMackin ended a Peabody drive with an interception at the two-yard line that he returned to the 43. But four plays later Peabody returned the favor when Isaiah Jackson intercepted the ball in the end zone for a touchback. Peabody quarterback Cooper Baugus guided the offense from its 20-yard line to the defense’s 16. With 29 seconds left in the second quarter, linebacker Jake Patterson made a leaping interception inside the 15 and returned it to the 29-yard line. On Gibson Co.’s first play from scrimmage, the offensive line created a hole for running back Ozzy Rico to go through for a 69-yard race to the end zone for a touchdown. The two-point conversion was no good with Gibson Co. taking a 6-0 lead at the half.

Peabody received the opening kickoff for the third quarter. Two plays and 46 seconds later, Baugus scored a touchdown on a quarterback keeper with Isaiah Hicks kicking the extra point to give Peabody a 7-6 lead.

On Gibson Co.’s opening possession of the fourth quarter, the Pioneers turned the ball over on a fumble at the 23-yard line, giving Peabody great field position. On the first play, Gibson Co. was called for a personal foul, moving the ball to the 9-yard line. The Pioneers defense came up with three clutch plays, forcing Hicks to kick a field goal to make it 10-6.

Two plays later, Caden Wylie threw a 63-yard pass to McMackin down the left side for a touchdown with 6:52 left in the game. Will Cantrell converted the two-point conversion to give Gibson Co. a 14-10 lead.

Peabody started its final possession from the 17-yard line. The Tide picked up four first downs and moved the ball down to the 12-yard line. Facing fourth-and-seven, Peabody completed a pass to the one-yard line with 1:22 left in the game. The Pioneers defense couldn’t have showed any more enthusiasm, breaking through Peabody’s offensive line four consecutive times to stop Peabody and seal the 14-10 region victory.

“We played tough and very physical tonight. I can’t say enough about our defense on the goal line stand to end the game. This is a great win, but we have the opportunity to accomplish some of our goals we have set higher than beating Peabody. But this is one of the best wins of my career,” said Gibson County head coach Cody Finley.

The Pioneers had 225 total yards of offense with 124 yards rushing and 101 yards passing. They picked up 15 first downs and were penalized two times for 15 yards.

Peabody had 305 total yards with 237 rushing yards and 68 passing yards. Peabody had four penalties for 45 yards.

Senior Camron McMackin was named the Pioneer Player of the Week. McMackin had three receptions for 81 yards with a touchdown. Defensively he had three tackles, two pass deflections and two interceptions. See GCHS Scoreboard sponsored by State Farm.

TEAMMATES CELEBRATES WIN OVER PEABODY– The Gibson County defense celebrates after stopping Peabody shy of the end zone on fourth-and-goal with four seconds remaining in the game for a huge 14-10 region  win.

TOUCHDOWN – The Pioneer offensive line created a hole for running back Ozzy Rico to go through for a 69-yard race to the end zone for a touchdown to give Gibson County a 6-0 lead at the half. (Photo by Lori Cathey)

FIRST DOWN –Camron McMackin catches a 13-yard pass for a first down in the second quarter against Peabody. McMackin was named the Pioneer Player of the Week. He had three receptions for 81 yards with a touchdown. Defensively he had three tackles, two pass deflections and two interceptions. (Photo by Lori Cathey)

TAKE DOWN – A Peabody running back can’t get away from Gibson County’s linebacker Jake Patterson during the second half Friday night. Patterson had six tackles and one interception against Peabody but left the game with a season-ending injury.  (Photo by Lori Cathey) 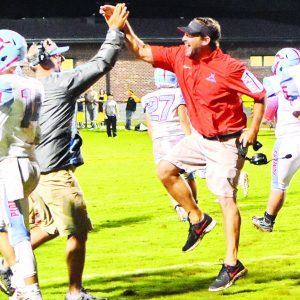