Gibson Co. High School and Spring Hill were two of 65 schools statewide to score all 5’s. Medina Elementary had no scores because the school only goes to second grade.

In their brief remarks to the board, principals highlighted areas of focus as well as their schools’ achievements.

Dyer had a 3 overall on TVAAS. Students’ best TNReady scores were in Science.

“A concern is our current eighth graders,” Turner, who transferred from Kenton at the beginning of this school year, said.

Hughes credited his faculty and staff and the culture they’ve built to the school’s strong growth scores (5’s across the board).

“We’ve got great teachers; we’ve got a great staff,” he said. “We have a great culture and good environment.”

DuRall is in her first year as principal, taking over from Turner. She said teachers are focusing on 3-4 English Language Arts.

“We’ve already put a few things in place to really dig into some individual data,” she said. “We are still growing our students. We’re hoping to take those bubble students and move them up.”

Kenton had an overall TVAAS score of 4.

Rutherford was one of five district schools to register a composite score of 5. Hinson noted work to be done in 3-5 English Language Arts.

“We’ve got some good teachers there,” he said. “We’re already working. This is utilizing the [academic] coaches and [instructional] supervisors. We couldn’t do it without them.”

SGC also had an overall TVAAS score of 5. The school had 3’s in Numeracy and Social Studies, which Rogers cited as primary areas of focus. Rogers highlighted students’ science scores on End of Course tests with 72 percent testing On Track or Mastered.

“Our chemistry teachers did exceptional jobs,” he said.

With 1’s in Literacy and Science, the school’s overall composite dropped to a 3.

“We’re not used to having those 1’s there,” Maloan said. “We’ll address those pockets.”

Students performed well in science, with 85 percent of third-eighth graders testing On Track or Mastered.

“These [growths scores] are significant, Clark said. She was particularly pleased with 6-8 science, up from around 40 percent last year to 90.9 in 2018.

Yorkville was a 5 overall in TVAAS, and Lee noted the “tremendous growth” students made. She said teachers’ biggest focus are this year’s grades 4, 6 and 8 with the biggest issue being literacy. The school is adding a different curriculum for writing to help improve literacy, she said.

It’s the second year principals have presented their own data to the board. Director of Schools Eddie Pruett thanked them, the district’s instructional supervisors and academic coaches for pushing and helping teachers and students to succeed.

“I look forward to coming back next year and hopefully having even better results,” Pruett said.

Pruett gets high marks – In their annual evaluation of Pruett, board members gave him high marks. His composite score on the 1-5 scale is 4.26, down slightly from last year’s 4.38.

Pruett noted that the board cited personnel and recruiting as an area of weakness.

Pruett said the numbers are important, but he’s more concerned about being a strong leader who helps the district provide as many opportunities as possible for its students.

“I think you do a very good job,” board member Steven Tate said. “It’s a huge task, and there’s a lot to balance.”

Board leaders re-elected – The board re-elected its leaders for another year. Tom Lannom will again serve as chairman, Charles Scott as vice chairman and Treva Maitland as Tennessee Legislative Network representative.

Lannom was re-elected to the board in August and was sworn at the beginning of the meeting.

New uniforms – The board unanimously approved a bid for 100 uniforms for the SGCHS band. Pruett said the name change from Medina Middle to South Gibson Co. Middle rendered to middle school band uniforms obsolete. The high school will pass down its current uniforms to the middle school and get new ones from FJM Uniforms at a cost of $412 per uniform. SGCHS will order 100. Board members also amended the budget for the expenditure. 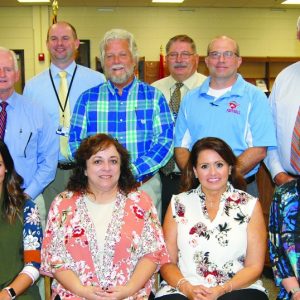