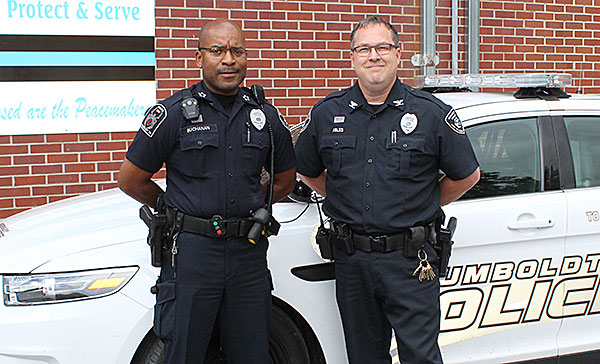 ON THE JOB – Humboldt Police Chief Reynard Buchanan (left) and Assistant Chief Dan Ables have been on the job as the ranking officers of the HPD for a little over four months now. The transition of the line of command was seamless with both men assuming new duties with the department.

It has been a little over four months since Reynard Buchanan was appointed chief of police for the Humboldt Police Department after former chief, Rob Ellis, retired. For most Humboldtans, the change in leadership went smoothly and no one noticed any drastic adjustments within the department.

Chief Buchanan has now settled into his new position with what was a seamless transition. As smoothly as the transition went, the chief said there were quite a few obligations he focused on.

“My duties changed,” Chief Buchanan said last week. “The responsibility as the top leader brings more challenges and stress. I have to take responsibility when something bad happens. At the same time, when the department does something good, it reflects on me as a community leader.”

Buchanan said the biggest change when he became chief was he now has to answer to the mayor and board of aldermen. Buchanan noted they all have good working relationships but he did not answer directly to them while he served as assistant chief.

But it’s not only the mayor and board supporting Chief Buchanan, the entire city has gotten behind their new chief.

“I think I’ve been accepted well by the community,” Buchanan explained. “Most everyone I come in contact with seems pleased I was appointed chief. Our police department has a good relationship with the community.”

Much of the support comes from Buchanan’s past and upbringing. He is a Humboldtan through and through. He graduated from Humboldt High School in 1994. He worked at Emerson Electric for seven years. During that time he became a reserve officer with HPD and was later hired full time with the department in July of 1998. In Chief Buchanan, the people of Humboldt know what they get—a compassionate leader who is involved in the community, yet is firm when it come to crime.

As assistant chief under Ellis, the transition began months before when Ellis announced he was retiring. This gave Buchanan a chance to learn and understand the duties of the chief.

“While I was assistant (chief), I learned about 50-percent of the chief’s position and what it would bring,” Buchanan noted. “It helped that I knew my work family (fellow policemen).”

Part of the ease during the transition was having a quality police force. Buchanan said he leaned on his assistant chief, Dan Ables, as both learned their new positions. 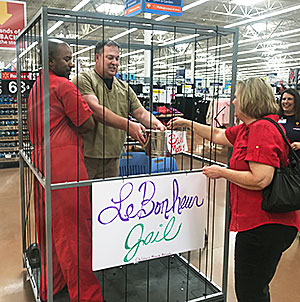 JAIL BIRDS – Humboldt Police Assistant Chief Dan Ables accepts a donation from a customer at Walmart last Saturday during a fundraiser for LeBonheur. Ables and Chief Reynard Buchanan were in a makeshift jail raising bail money to get out, all in good fun while raising money for the Children’s Miracle Network.

“Assistant Chief Dan Ables has been tremendous help to accomplish what we do,” Buchanan said of his right-hand man. “Dan is very knowledgeable with computers and paperwork. Overall, he has administrative experience from his job in South Carolina. He has experience being a training officer before he was promoted to assistant chief.”

Perhaps the hardest part of being chief is the emotional turmoil of violent crimes.

“As assistant chief, I thought I had an idea of how a chief would feel when violent acts occur,” Buchanan said. “Being chief, it’s more troubling. It weighs heavy.”

Buchanan’s top objective is for the people of Humboldt to feel safe.

When asked where he is now, as opposed to his first weeks on the job, Buchanan confidently says he is more comfortable with the duties as a chief.

“Over the past four months, what I’ve been able to accomplish, I’d give myself a B-minus,” the chief graded his performance. “Not a B, because that includes a B and B-plus. I’m not at a B-plus. There is so much I want to get done but there aren’t enough hours in the day.”

Chief Buchanan has big goals he hopes to accomplish in his first year as chief. He plans to continue strengthening the police force through training. The biggest goal is to bring charges to those involved in Humboldt’s two unsolved murders from 2011 and 2017, and to prevent any other loss of life.

With all the hoopla on the national media bringing attention to the actions of a few bad cops and how those communities have turned on the police force, Buchanan says Humboldt is way above average when it comes to community support. He believes the men and women of the Humboldt Police Department strive to be part of the community. Having a positive relationship with the general public is key in having an effective police force.

“My message to the public is our police department is a family of imperfect people—we all are human,” Buchanan stated. “But we strive to be professional and do the job we are sworn to do. Public safety is our number one objective.”