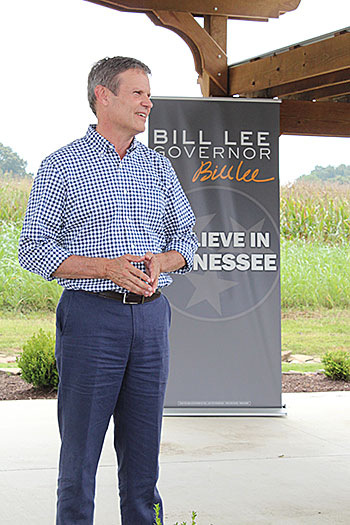 CANDIDATE VISIT – Gubernatorial Republican candidate, Bill Lee, stopped in Humboldt last Wednesday at the Gibson County Industrial Park to speak with Gibson County folks. Lee is on his second trek across the state, hitting 95 counties in 95 days. He will face off against Democrat Karl Dean in November to be Tennessee’s next governor.

One of Tennessee’s gubernatorial candidates paid a visit to Humboldt last week for a gathering at the Gibson County Industrial Park. Bill Lee, Republican primary winner, spoke to dozens of supporters.

Lee, while campaigning for the Republican nominee, trekked across the state on a tractor, hitting 95 counties in 95 days, from Mountain City to Memphis. Now, Lee is doing the same, this time around in an RV. Last Wednesday, Lee stumped in five counties, making for a busy day.

“I’m a third generation cattleman from west Williamson County,” Lee told the group gathering at GCIP, many of who were local farmers. “My family has been in the Ag industry for generations. Agriculture makes up 13-percent of the economy in Tennessee. Ag is critically important to Tennessee.”

Lee says Tennessee has the opportunity to lead the nation with innovation in the farming business. He noted the state has ignored vocational education in the schools. Lee wants to bring more trade courses back into the high schools, which is very important in providing a highly trained workforce for industries already here or those looking to locate in Tennessee.

Lee spoke from the heart about the passing of his first wife. It was at that time God changed his life, he said. He got involved with non-profits doing life-saving work, which in turn led him to run for governor.

“I spent time with a student from an inner-city school who was failing,” Lee said. “I got him into another school and he thrived. That was touching for me.”
Lee said Tennessee is making strides in education but is still near the bottom in the nation in education. That has to change, he added.

Lee also spends time mentoring an inmate in jail. The state has to do more about recidivism, he noted. When people get out of jail, 50-percent commit crimes and are back in jail within two years.

Lee said during his first 95-county drive, he met with 1,000s of people at town hall meetings and listened to their challenges in Tennessee. 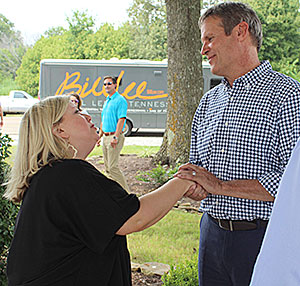 VISITING WITH LOCALS – Bill Lee, Republican candidate for Tennessee governor, shakes hands with Humboldt Chamber of Commerce executive director, Amanda Love, while stumping in Humboldt last Wednesday. Lee and his wife, Martha, are traveling across the state in his RV meeting the people of Tennessee.

“We are privileged to live in Tennessee—we’re the envy of other states,” Lee added. “We have remarkable people and a good environment. I want to take it to the next level. I want to take it from good to great. Good can be the enemy. We settle for mediocrity. Tennessee can be a better place to live. We can lead the nation in education and in public safety.”

“I will make sure every segment receives that focus,” Lee said. “I’ve commented on this in the past of our state. In the past, this part of the state has been left behind.”

This was music to the ears of those attending the rally, especially the farmers.

“There must be continued focus on the Mega site in Haywood County,” Lee said. “We’ve got to get that completed.”
When asked what he would do for West Tennessee, specifically for Gibson County, Lee said there must be an understanding of where Tennessee is on education, particularly vocational and agricultural education.

“Obion County has a program that can be the model for the state,” Lee explained. “For rural West Tennessee, agriculture industry and agriculture technology has a great deal of opportunities.”

Lee spoke of his campaign during the primary election and how he was in last place in the polls. When he began his first 95-county trip, some stops along the way had very few people attending but he and his wife, Martha, continued on. During that time Lee’s numbers began to rise but he was never considered a front-runner, falling behind Randy Boyd and Diane Black.

But on Election Day, Lee received enough support all across the state to win the Republican nomination. In November, he will face off against Democratic nominee, Karl Dean.

Lee said he looks forward to debates with Dean where people will find out where both candidates stand on the issues facing Tennesseans.