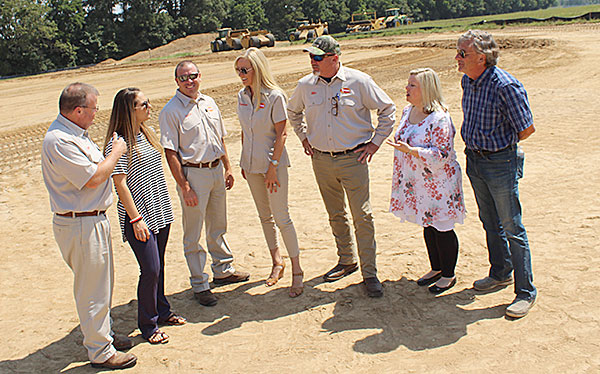 As one contractor said, they are “scratching dirt” at the Tyson Hatchery. Construction work is now underway at the hatchery located in the Humboldt Industrial Park.

Workers began moving dirt on the northern segment of the industrial park, the soon-to-be home of a 100,000 sq.ft. Tyson’s hatchery and the live production office.
Tom McCue, complex manager of all the Humboldt area Tyson projects, said the hatchery is on an 80-week schedule for completion. The office building should be finished within eight months.

Currently local contractors are doing the work. Lashlee-Rich Contractors is the construction manager for the live production offices, which is approximately 3,500 sq.ft. 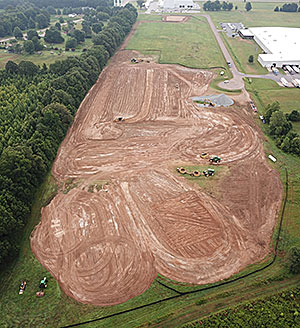 AERIAL VIEW – Tyson personnel used a drone to take this aerial view of the hatchery and live production office site at the Humboldt Industrial Park. To visualize the scope of the site, American Wookmark is the building on the right.

Milan Environmental Contractors is doing the dirt work for the hatchery.

In all, 26 aces at the Humboldt Industrial Park will be used by Tyson. A section of land between the hatchery and office is available for future expansion of the hatchery if needed.

McCue and David Corvin, live production manager, said once the hatchery is up and running, it will produce 2.4 million chicks per week, with a holding capacity of 7.2 million eggs. Tyson uses only Cobb 700 breed of chickens and creates their own feed to assure consistent quality.

Local pullet chicken farmers will be used to breed fertile eggs. These eggs will be trucked to the hatchery and incubated for 21 day until they hatch. The chicks will then be transported to broiler farms where they are raised for 51 days to a weight of 6.75 lbs.

These chickens will be taken to the Tyson Processing Plant that will be located in the Gibson County Industrial Park. McCue said they are still a few weeks away from moving dirt at the processing plant.

Presson, along with complex safety manager Mike Rau, will work at all Tyson buildings within the Humboldt complex, including the processing plant, hatchery, feed mills and granaries.

Corvin said most of the pullet and broiler houses will be located within a 35-mile radius of Humboldt but some could be as far as 50 miles away.

With so many eggs, chicks and chickens traveling on area highways, Tyson will have trucks running back and forth from chicken houses to the hatchery and processing plant once operations begin.

Tyson uses climate-controlled trucks to pick up the eggs, according to Corvin. Each load will have 165,000 eggs that are picked up twice a week. Once the chicks are hatched, they are transported, over 100,000 per truckload, to the broiler houses. The fully-grown chickens, approximately 42,000 per truckload, are taken to be processed. There will be 50 truckloads of chickens coming to the processing plant each day.

Humboldt and Gibson County have been buzzing for months after the announcement of Tyson locating here. Moving dirt for the hatchery and live production office are reminders of good things to come.