In March of 2016, a group of Dyer Firefighters began talking about restoring the first fire truck the city ever purchased.

The truck is a 1946 Ford/Oren Pumper with a 500-gallon pump. It has been moved from place to place since it was decommissioned in 1985. Eventually the truck wound up behind the city shop with a tree growing through it.

In April of 2016, the city board agreed to let the fire department try and refurbish the truck with the stipulation that no taxpayer dollars would be used for the project. Some of the truck was disassembled and attempts were made to get the motor running.

In March of 2018, the truck was moved to David’s Garage out of Bradford. The project began with evaluating the brake system. It was determined that the entire system needed to be replaced. So brake drum, shoes, master cylinder and valves were removed and replaced.

New tires were ordered and installed by Raspberry Tire and Service Center in Trenton.

The tie-rod was bent and had to be straightened.

The original flat-head motor was removed by the end of April. The motor was disassembled and sent to Kelly’s Engine Works in Union City for repairs. The cylinders were honed (one required a sleeve), and new valves and valve guides were installed. The motor was returned to the garage in June 2018.

On July 3, the engine came to life. They missed the deadline hoping to get it going for the Dyer Station Celebration Parade on the Fourth of July. The truck was delivered at 8:15 p.m. on the fourth.

Roy Morris drove the truck from the fire station to the park for the fireworks. Bob Moore rode shotgun.

Over 150 hours have been spent on the project. Firefighters raised approximately $4,500 through a fish fry, calendar sales and concession sales at various events. Local businesses also donated money.

The truck still needs to be rewired and painted, and donations are still being accepted at Dyer City Hall. Fundraising will continue until the truck is completed.

“The Dyer Fire Department would like to thank all those that have supported this project,” said Capt. Patrick Sawyer. “We are proud to have this piece of Dyer history restored to its former glory, proving that anything can be accomplished, even things that they said can’t be done.” 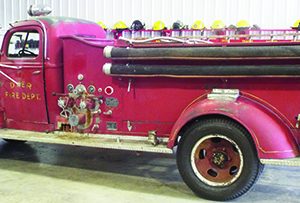