The Kenton City Council convened on July 10 and discussed Fourth of July Weekend, the mosquito fogger, and clothing allowances.

Mayor Danny Jowers said that as long as the Gibson County Sheriff’s Department covered the insurance on the trustees working in Kenton, everything would be fine but the city would not take that risk should it fall back on the city. Jowers praised the two trustees working for the city now.

The third and final reading of 2018-19 budget was read and approved. The three-cent tax rate brings in about $16,000. Property values on the Gibson Co. side went down. Nothing is being raised in the city this year. Jowers said the city is strong and healthy. Jowers praised the efforts of City Recorder Shayna Jackson.

Jowers praised the Fourth of July weekend. There were no problems and no issues at the White Squirrel Festival. They had a great car show. The mayor’s choice this year was a 1970 Pontiac LeMans. They had 40 vendors this year.

Supervisor Nate Spencer praised the various municipalities that donated money to the city’s coffers. They received donations from the city businesses, Union City, Dyer, Trenton. The inmate workers were praised as being Johnny-on-the-spot. Spencer said he has not been able to get in touch with the Sheriff in Gibson Co. to thank him.

Jowers said, “We certainly appreciate our sheriff of Gibson County because he does such an excellent job.”

Jowers reported on the building downtown; they are supposedly preparing the deed. Liens have to be released on it through the courthouse in Union City. Taxes are owed on it and must be paid.

Jowers said the mosquito fogger has not been out as much as it should have. The fogger was bought used and the city had to replace parts on it. Now, the solenoid that makes it come on and off is bad. The parts must be ordered from Germany. The last time they had to have a part, it took two months to get it. Spencer said a new fogger would be $7,200.

Jowers said he thinks the city needs to buy a grass edger for the parks. Alderman Wade Simpson said he already has it ordered.

Simpson said a few years ago, the city had lowered the city workers’ clothing allowance due to improper use. It was lowered from $300 to $200. Simpson wants it increased back to the old rate. Work clothes are pretty expensive now. Alderman Gerald Keele said that Trenton Laundry and Armark has some good work clothing now. Jowers said the commissioners can take care of this.

Jackson said that Municipal Technical Advisory Service (MTAS) said that overtime pay is for hours actually worked. So if they are off on July 4, it will affect the overtime pay. Vacation and holiday are not hours worked. Jowers said he would contact MTAS to see what he can find out. No decision will be made on this now.

Spencer said, “Everyone knows where I live, and I think half the town knows my phone number.” Spencer tries to take care of any after-hours work before he will call in extra help for those working on standby.

Alderman Glenn Zaricor said they need to look at the roof on the gym. Spencer said it has been leaking right above where the little press box is. The roof was put on seven or eight years ago. Jowers said it ought to have some sort of warranty. It could be a gutter stopped up, said Spencer.

Jowers said the Orchard Street bridge is now open. The county did an excellent job on that bridge. Simpson said the city needs to clean the creek out from College Street to Orchard St. He said it’s a mes 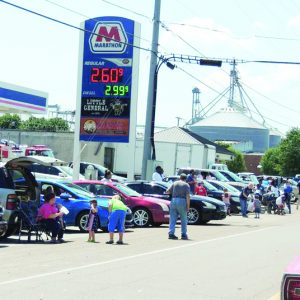