The Dyer city board met July 9 with all members present except Robert Johnson and Ray Carroll. The board discussed city improvements, purchasing a roller, and Fire Department resignations.

The board reviewed bids for asphalt repair. City Recorder Nathan Reed said the infrared asphalt repairs have a lifetime guarantee. The city received only one bid on the asphalt projects. They were given options on it being infrared or traditional. The traditional bid comes with only a one-year warranty. The city accepted the bids but did not award the bid.

Mayor Chris Younger said, “The more money we can save right now, the more asphalt repairs we can do.” Younger continued, “We can go buy a roller, put it on the front of our skid steer and do our own asphalt repairs. The roller will cost us $11,000.”

Alderman Tom Mikkelsen asked Supervisor Randy Gregory if he had the time to do the street repairs. Gregory responded, “You make the decisions and we’ll work it in.”

Younger said the city spent about $41,000 on Orr Road a couple of years ago. Reed said the labor was $9,800, and the rest of the cost was for materials.

Younger said, “We have to start saving money and the best way to do that is for us to start doing the repair work ourselves.” The board voted to get bids on the roller.

VFW – The rental rate on the VFW of $40 plus a $10 deposit was approved by vote. The increase is to try and save the city costs and come nearer to making the VFW break even. Now the city is losing about $2,500 per year on the VFW. This does not have to do with any renovations done in the past.

The deposit will be returned to the person or group renting the building upon returning the key.

The board approved selling the tool boxes in the street department garage to Lafayette Johnson for $100.

Miscellaneous – Younger thanked Gregory for all the changes he made at City Shop. He also thanked Fire Chief Ryan Shanklin for the fire department’s participation in the activities over the weekend.

Gregory said he needed some spare parts as they are out of everything. They even had to borrow a $35 part from Rutherford. He asked for $1,500 in parts. It board approved his request.

The city voted and approved getting bids on resurfacing the tennis courts.

Fire Dept. – Shanklin said that firefighters not up on their training have been asked to resign from the department per state law. Hands-on training is available at the department and online.

Any fireman that lives outside the five-mile radius of the city would have to be approved or disapproved to continue to be a city fireman.

Younger said, “If you do an exception to the rule on anyone, it would have to apply to everyone, thus opening the proverbial can of worms.”

Younger said, “I just want to say one thing about this. I appreciate everyone that was on the fire department and everyone on it now. I understand policy changes. These people only want to help people that live in this city and that is a commendable endeavor.”

Ivie asked if there is any asbestos in these buildings. He said that should be the city’s starting point in changing the look of downtown. An asbestos check should be the first concern. 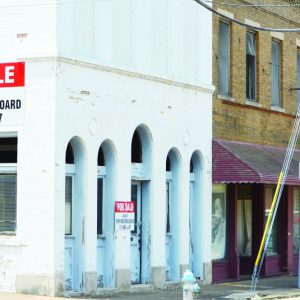