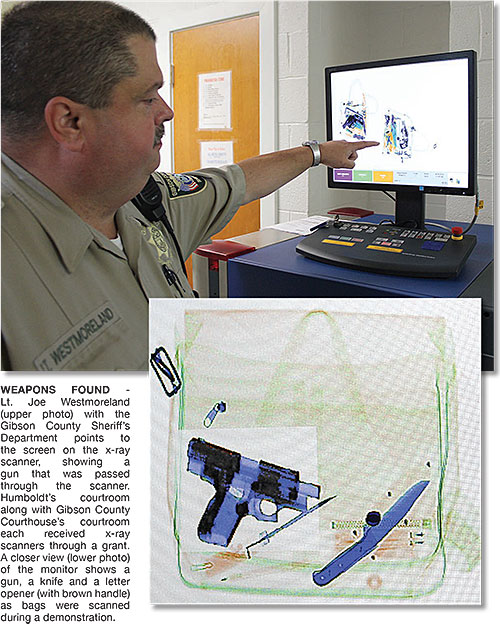 Gibson County citizens entering the courtroom at the Municipal Building in Humboldt can feel safer than ever now that new piece equipment is in place. The second-floor courtroom has a new x-ray scanner.

“I am thankful for the efforts of the Gibson County Sheriff’s Department in acquiring the grant for the scanner,” Clerk & Master Amy Brown said. “Courtroom security is an important issue, not only to protect the safety of all persons conducting business within the courtroom, but also to protect the integrity of the judicial process, thus the banning of cellphones.”

The Smiths Detection Heimann X-ray Technology machine is located in the hallway where people enter the courtroom next to the full-body walk-through metal detector.

The scanner is similar to those used in airports to scan carry-on luggage, purses, small bag and briefcases. 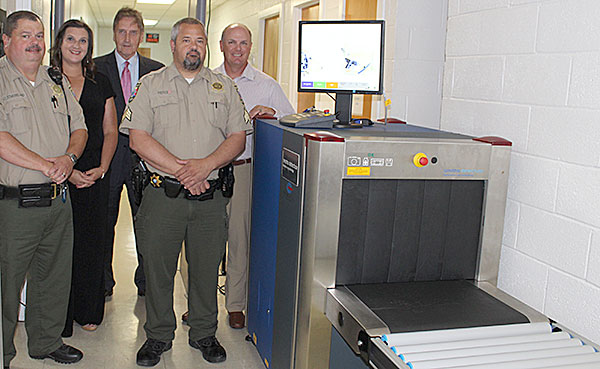 NEW X-RAY SCANNER – The courtroom in the Humboldt Municipal building was recently outfitted with new safety and security equipment. Lt. Joe Westmoreland, (from left) Clerk & Master Amy Brown, Judge Clayburn Peeples, Sgt. Jeremy Pierce and Sheriff Paul Thomas performed a demonstration last week of the new x-ray scanner. The officers purposely ran guns, a knife, cellphones and other objects in bags through the scanner that showed the x-ray view on the monitor. The scanner can detect weapons and will flash a box on the screen but trained deputies can detect much more that may not be detected.

“People (and their belongings) can be scanned three ways,” Gibson County Sheriff Paul Thomas said of those entering the courtroom. “We use hand-held scanners, the new x-ray scanner and walk-through metal detectors—plus the keen eyes of officers. But nothing is foolproof.”

Lt. Joe Westmoreland and Sgt. Jeremy Pierce with the sheriff’s department are supervisors for the new scanner. Lt. Westmoreland did a demonstration last week for Sheriff Thomas, Judge Clayburn Peeples and Clerk & Master Brown. Westmoreland said objects they look for when scanning would be any type of weapon or explosives, knives and cellphones, all of which are not allowed in the courtroom.

“When I go to Jackson, I always take everything out of my pockets—pens, cellphone,” Peeples explained of the process. “It is a deterrent.”

Sheriff Thomas agreed, saying much of what law enforcement does is deter crime.

Some may question why cellphones aren’t allowed in courtrooms. There are several reasons, according to the sheriff.

“People think, ‘what’s the big deal with a cellphone’,” Sheriff Thomas explained. “It can be disruptive in court but mostly it’s a security deterrent. They could pass it off to an inmate in court. They could let people on the outside know what’s going on.”

“They could let someone know, ‘he’s coming out of the courtroom now’, or they might take a picture of the jury,” Judge Peeples added. “Unfortunately we live in a time of harassment. They could harass jurors.”

The x-ray scanner was purchased through the Administrative Office of the Courts (AOC) Court Security Grant Program. The Gibson County Sheriff’s department applied for the grant, which is a 90-10 grant where 90-percent of the purchase is funded by the grant with a 10-percent match made by the county.

The Gibson County courtroom in Trenton also received an x-ray scanner with the grant.

In addition to the new security equipment, the Humboldt courtroom is getting a much-needed facelift. New chairs were purchased for court officials, attorneys, jurors and others. The audience area still has the old church pews for seating.

COURTROOM UPDATES – Gibson County Clerk & Master Amy Brown stands in the Humboldt courtroom that was recently updated with new chairs for attorneys, jurors and others doing business in the courtroom. Brown, who was first hired in 1999 said the previous chairs were worn and tattered, and badly needed replacing. Soon the courtroom will get a fresh coat of paint as well.

“I began working here as a deputy court clerk in July 1999,” Brown noted. “The seating in the courtroom had tremendous wear and tear, and in much need of replacing.”

Soon the courtroom will receive a fresh coat of paint. Trustees will be used for labor, saving the county money while teaching skills to those incarcerated. Brown said the painting project will be a joint effort between the city of Humboldt and the Gibson County Sheriff’s Department trustee program.

Brown said people are already commenting on how good the new chairs make the courtroom look, including Judge Peeples.

“As an attorney that practices all over West Tennessee, I’m impressed with the efficiency and effectiveness of the clerks office,’ said Jackson attorney, Earnest Brookes. “I always enjoy coming to Humboldt.”

Brown explained the functions of the different courts.

General Sessions Court consists of two types of court cases. Criminal Court for misdemeanor charges, and Civil Court for small claim suits up to $25,000, evictions and orders of protection.

In a typical week, the Gibson County General Sessions Court in Humboldt could have 125 cases on the docket. They meet every Wednesday. Plus, on the second and fourth Mondays, civil cases average 85 per day. That’s around 670 docket cases per month. Some cases are new while others are ongoing or pending cases.

Chancery Court meets the second and fourth Fridays with an average of 35 cases on the docket per week.
Circuit Court meets for a one-month term three times a year. Those sessions can see upwards of 175 to 200 called up on the docket in addition to trials that my be conducted.

With thousands people walking into the courtroom each year, safety and security are important. The new x-ray scanner and other security equipment, paired with capable law enforcement, the courtroom at the Municipal Building is safe and secure.