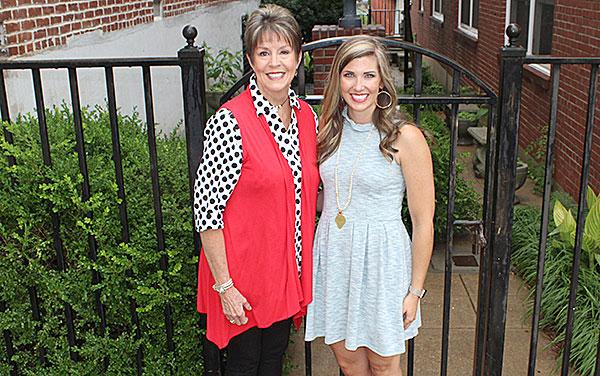 The 81st annual West Tennessee Strawberry Festival concluded a little over a month ago. But that hasn’t stopped Festival President Chelsea Caraway from moving forward to next year’s festival.

Caraway, who is a schoolteacher, said summer is her only down time and wanted to hit the ground running with her presidency. Naming a general chairman is the biggest decision for every festival president. And doing it now, allows the duo to start brainstorming as they plan for next year’s Strawberry Festival.

“I started thinking (of a general chairman) as soon as Melissa (Swingler) asked me last year,” Caraway said of selecting her right-hand person. “It’s a big decision. Your partner must be a team player.”

Caraway put a lot of time and prayer into making her selection. She asked herself, who would be best for the job, best for the town? But first, she wanted to get through this year’s festival before making a final decision. She also knew the decision needed to be made sooner than later due to her job.

“I had a mental list in my head,” Caraway said of potential general chairman candidates. “I saw her (Langley) at Milano’s and it hit me—she would be great. I asked Gary (her husband) and he said she would be great.”

Caraway called Langley and said she had something to ask her about the festival. Plus, Langley’s son, Blake Allen and friend of the Caraways, was home and they wanted to catch up.

“I nearly fell off the couch,” Langley said after being asked to be general chairman. “I was shocked.”

“When she called, I thought she wanted me to chair a committee,” Langley recalled the phone conversation. “I wondered who’s stepping down. Never in my mind did I think it was to be general chairman.”

Langley told Caraway she needed to sleep on it and needed to talk with her husband, Gene Langley. She asked a few questions that night.

“I’ve been on boards and volunteered all my life,” Langley recalled contemplating whether or not to accept the position. “The more I thought about it, I said, ‘I can do that’.”

Langley called Caraway the next day and accepted.

Caraway thinks some people may think her decision is a little bizarre since the current trend of festival leadership has been younger adults, which has been good. Caraway said there are lots of people Langley’s age who are more than qualified to serve as festival leaders but never had the opportunity.

She thinks this team of youth and experience will be good.

Langley, who is retired, agreed. She said there are many people in the middle, between the younger generation and those around her age, who would make good general chairmen and presidents.

“She will get the job done,” Caraway noted of Langley’s qualities. “She’s very organized. She’s on top of things.”

Langley remembered Caraway as a student at Humboldt Middle School. Langley was a teacher there for 17 years, also serving as guidance counselor during her tenure there.

“When she was in school, she wasn’t one to lay back,” Langley recalled the young Chelsea DeBerry as a middle school student. “She never minded hard work—that’s good. She would jump right in and make it happen.”

Langley recalled first moving to Humboldt after graduating from UT Martin. She taught school in Bells as her first job. It was at that time Langley got her first taste of the Strawberry Festival first hand, living on Main Street in Imperial Apartments. She recalled many of the residents would bring their lawn chairs on the front lawn to watch the parades.

A few years later after she started a family, her youngest son Blake was crowned Strawberry Festival Jr. Host.

Also earlier in her family life, Langley built a miniature float all by herself. It was a take off from the movie, “E.T.” where she used her oldest son, Justin’s, bicycle. Justin sat on the seat and Blake rode in the basket with a blanket draped over him, like E.T. was hiding in the movie. The float was entitled “Extra Terrific”, a play off of the initials, E.T.

Her husband, Gene Langley, is also involved with the Strawberry Festival. The Ford dealership has been a sponsor for many years. Gene Langley Ford donates trucks used to pull floats and for dignitaries during the Grand Floats Parade.

Although Langley has retired from teaching, she still stays active. She serves on the Carl Perkins Center Board of Directors, a member of the Library Foundation, a member of Junior Auxiliary and an advisor for her UTM sorority.

“I like to do stuff to keep busy,” Langley said.

Over the years, Langley said she’s attended almost every festival but may have missed one or two since 1973.

This festival duo of young adult and retirement ages has the potential to provide an entirely new perspective on next year’s festival. Caraway and Langley are confident it will work and will work well.

Who could disagree—after all, both are known as dedicated professionals who are more than capable of getting the job done, and done right. The 82nd West Tennessee Strawberry Festival is in good hands with the Caraway/Langley team leading the way.