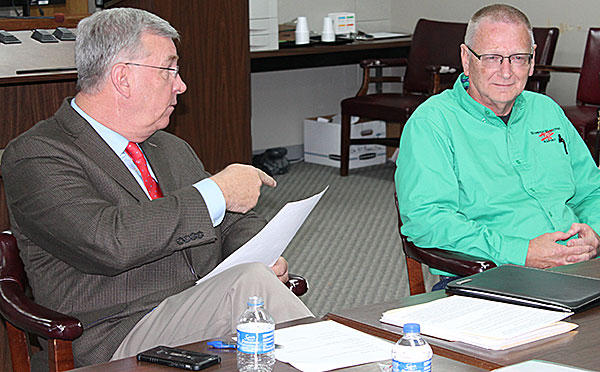 NEW AIRPORT DIRECTOR – After the April 9 city board meeting, Mayor Marvin Sikes (left) introduced Fill Johnson as the new Humboldt Municipal Airport director. Johnson has been on the job for several weeks now and keeps up with reports and data of all activity at the airport.

The Humboldt Board of Mayor and Aldermen tackled a short agenda while meeting April 9. Even though the agenda was small, two important items took quite a bit of discussion.

The first big ticket item was approving a resolution to authorize the submittal of an application to the Tennessee Department of Economic and Community Development for Local Parks and Recreation Fund (LPRF) grant for fiscal year 2018.

During the previous city board meeting, the mayor and board members were presented two options for spending the $1million grant. The board wasn’t prepared to see any options but was only supposed to approve submitting the application.

After discussing the options during the March meeting, board member Leon McNeal motioned to table the application until a final plan for the grant was in place.

“Last time we were put in that position of two options,” Mayor Sikes said during the April meeting. “That’s a tough position to be put in, to choose an option. It would be hard for all six of us to come to an agreement. There would be an option C and D.”

Alderman Bob Pruett asked if option B was what the mayor had presented.

Sikes said both options had many of the same pieces.

“So the splash pad is out?” Alderman Don Graves asked.

Graves asked the mayor who made that decision. He noted that most of the City Parks board members were in favor of a splash pad.

“That night, most of the (city) board was most favorable (for option B),” explained Sikes.

“I’m very proud to get this done,” McNeal said. “Let’s move forward. We’ve been working on this for six years.”

The vote to submit an application for the grant passed 4 – 1 with Graves casting the nay vote.

Once the application is submitted and approved, the city will be responsible for half of the $1 million funding, 50 – percent grant money and 50 – percent from the city’s budget.

Much of the work to be done is to get the parks ADA (Americans Disability Act) compliant.

Viking Park restrooms will be renovated at a cost of $20,000.

The second big agenda item was to address issues with dog adoption at the city’s dog pound/animal shelter. Two Humboldt citizens, Susan Drumwright and Jane Leatherland, have taken it upon themselves to assist finding these dogs new homes.

The main issue is not caring for the dogs, but instead getting these dogs spay or neutered, and rabies vaccination.

“We work real good with the people at the shelter,” Mayor Sikes said. “And we hope to do better.”

Sikes said when he took office, they euthanized 100 dogs a year but now they keep the dogs longer to find them good homes. This year, the city has only euthanized seven dogs, a major increase to a humane way of dealing with the issue.

“We have an epidemic of puppies and litters of dogs, 20 to 25 litters,” Leatherland told the board. “Some mothers have eight to nine puppies per litter. That could turn into 175 to 200 more puppies.”

Leatherland said in one year they could possibly reproduce to over 1,400 puppies.

Drumwright has talked to a local veterinarian who will spay or neuter dogs at a discount rate of $50. Typically for a small dog the cost could be $120 and more as the weight of the dog goes up.

“I have four or five rescue friends that I call,” Drumwright said of getting the dogs adopted.

“Let’s go ahead and pay to neuter and spray them,” McNeal said.

There was discussion on the fees the city charges when the owner picks up their dog from the pound. Mayor Sikes said they pay a $15 fine. McNeal suggested raising the fine to $50 to cover the price of having the dogs fixed.

“I would like the adoption fee to be $50 to cover the fee,” Leatherland said. “Also, $50 (the dogs) will go to a better owner and not come back to the pound.”

McNeal was eager to vote but Mayor Sikes said the agenda item was for discussion only. He noted this was very good discussion and suggested city attorney, Terri Crider, draw up a resolution, making sure all changes would comply with state laws.

The board agreed. The resolution could be ready for the board to vote on at the next scheduled meeting on Monday, April 23 at 5:15 p.m. in the Municipal Building, second floor.