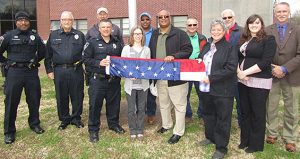 The city of Humboldt regularly replaces the flags at the Humboldt Municipal Building. The strong winds of February frayed the current American flag.

Before it could be replaced by the city, Woodmen Life representative, Kendel Dixon contacted Assistant Police Chief Reynard Buchanan with an offer to replace the current American flag with a new 5 x 8 ft. nylon flag.

Last Wednesday, representatives from the city met with Dixon and Brad Jones, Regional Senior Manager with Woodmen Life, to accept and raise the new flag.

In raising the new flag donated by Woodmen Life, Jones noticed that the Tennessee state flag is beginning to show signs of wear and will look into getting a new one to replace it as well.

Anytime the city takes down an old flag, they follow the proper procedure for folding it and then donate it to a local Boy Scout troop for a retirement ceremony.

The city of Humboldt works hard to keep the city looking good and the representatives present last Wednesday were most appreciative of this donation.