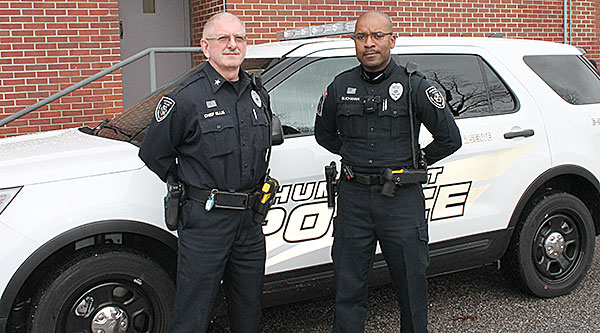 Humboldt’s top lawman will be signing off in the near future. Police Chief Rob Ellis submitted a letter of resignation and retirement to Mayor Marvin Sikes last week.

With almost 30 years as a Humboldt policeman, Chief Ellis’ last day will be April 20.

“I started in 1988, hired by Chief Raymond Kolwyck,” Ellis recalled. “I had previously worked for another police department but not as an officer. I graduated December 22, 1988 from the Police Academy and came to work here.”

Ellis said co-worker, Lt. Clyde Fuller, also graduated the same day from the academy. The two have worked together at HPD for decades. Fuller also plans to retire later this year.

With Ellis’ resignation and retirement in a little over six weeks, he requested Assistant Chief Reynard Buchanan be named interim chief during this transition time, giving Buchanan time to select his assistant chief and others in the chain of command. It will also give him time to ease into all the additional duties of being chief.

During last week’s city board meeting, Mayor Sikes presented Ellis’ resignation to the board, which was unanimously accepted. The board also voted to appoint Buchanan as interim chief.

Although Ellis is retiring from the police department, he doesn’t plan to sit back and take it easy. He said he was called on by the Lord to be a police officer and could take another job in the law enforcement field.

“I will continue to work,” Ellis said. “I’m weighing my options. It could be in law enforcement but in a different role. It could be full time or part time. I want a job with less stress and something I enjoy doing.” 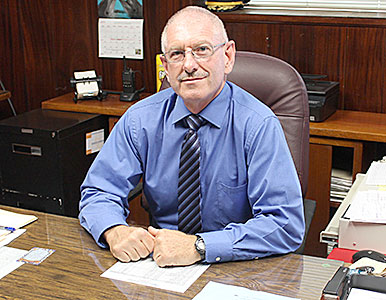 NEW CHIEF – Humboldt Police Chief Rob Ellis sits behind the desk after being named chief of police in July of 2014 in this Chronicle file photo. Ellis announced his retirement last week, effective April 20.

Over his career as a lawman in Humboldt, Ellis said there a several events that he remembers but two in particular stand out.

“We got a call of an elderly lady’s house had burnt,” Ellis said. “The house was unlivable but the lady would not leave the premises. After the fire was out, she went back in. Her family could not convince her to leave. They said a prayer and asked for help. I was able to calm her and offer reassurance. She went with her family. That was a good day.”

Later the family sent Ellis a thank you note that he still has today.

Another point in Ellis’ career happened while teaching DARE in the 90s, when he received a call years later.

“I got a call in 2014 from a former DARE student who became a police officer. He works in Murfreesboro. He was graduating to be a DARE officer,” Ellis said. “He said, at Stigall school when I taught DARE, he told me he did not like police officers but after going through the DARE program, I inspired him to become a police officer and do the same thing. That really stands out. Chris Williams is still a police officer today.”

But as good as these two stories are, many police instances do not have the same positive results.

“The most difficult thing as chief is crimes where people are killed or badly hurt,” Ellis added. “Having a homicide still active and not made an arrest, it bothers me every week.”

With Ellis leaving, he says the police department is in very capable hands under the leadership of Interim Chief Buchanan.

“Reynard has been a very good assistant chief,” Ellis said of his right-hand man. “He’s a hard worker and cares about the city and the department. I certainly feel he deserves to be chief. He will do a good job.”

“As interim chief, there are additional responsibilities and pressure,” Buchanan said. “But the chief (Ellis) has prepared me for that. We’re up to the task.”

When Ellis was appointed chief four years ago, he handpicked Buchanan to be second in charge as assistant chief. Ellis said Buchanan has all the qualities to be a good policeman and chief of police.

“Number one—he cares. He has a substantial amount of training in investigation. He’s a people person,” Ellis said of his colleague. “Interim Chief Buchanan will be in charge of the department until a permanent chief is appointed.”

No doubt Chief Ellis will be missed, not only on the police force, but in the Humboldt community as well. But Ellis leaves the position knowing he has a capable man at the helm in Interim Chief Buchanan.