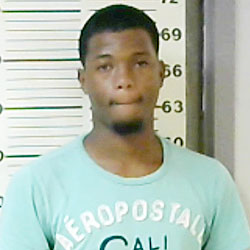 On January 28, 2018 at 12:36 P.M. officers of the Humboldt Police Department responded to a convenience store at Central Ave. and Mitchell St. in reference to a subject being shot. Upon arrival officers found a victim in the parking lot with nonlife-threatening gunshot wounds.
The subject was transported to Humboldt Medical Center and then airlifted.
After an investigation warrants were obtained on Monterio Demarius Ross, a 22 year old black male from Milan, Tenn., for attempted murder 1, reckless endangerment and possession of firearm during dangerous felony.
Ross is not in custody at press time. Anyone having information on his location should not approach but notify your local police department. Ross should be considered armed and dangerous.
This is still an active investigation. Anyone with information is asked to call the Humboldt Police Department at 731-784-1322.