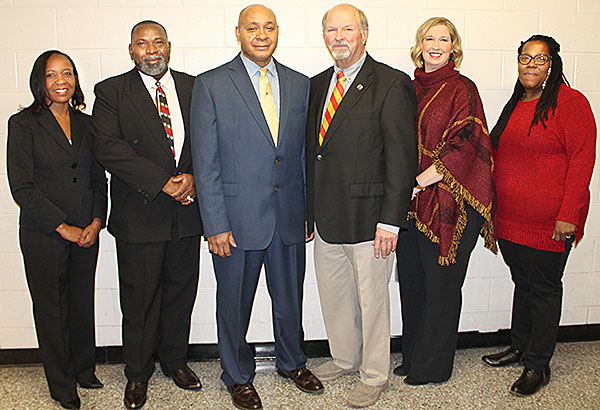 SCHOOL BOARD MEMBERS – Thursday night, four Humboldt School Board members were sworn in prior to the monthly meeting. Director of Schools Dr. Versie Hamlett (from left) is joined by board members Leon McNeal, Terry Johnson, Wayne McLemore, Lori Coleman and Valeria Smith-Wedley. Smith-Wedley and Coleman are new to the board. 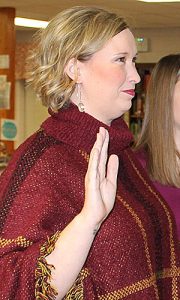 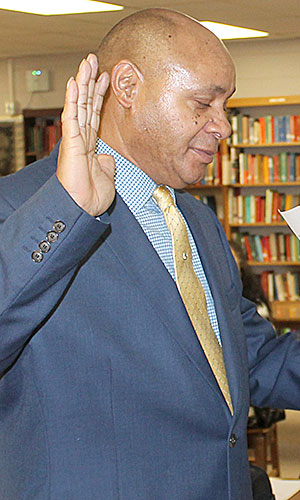 Two new members and two existing members were sworn in last Thursday evening, taking their seats at the Humboldt School Board table. Mayor Marvin Sikes sworn in the four prior to Thursday’s school board meeting.

The new board’s first item of business was to elect a board chairman, board vice-chair and a Tennessee Legislative Network (TLN) representative.

For vice-chair Johnson nominated Leon McNeal. McNeal quickly declined the nomination stating he had been on the board the longest and did not want to serve in any other role. McNeal then nominated McLemore to serve as vice-chair. There were no other nominations and McLemore was approved unanimously. 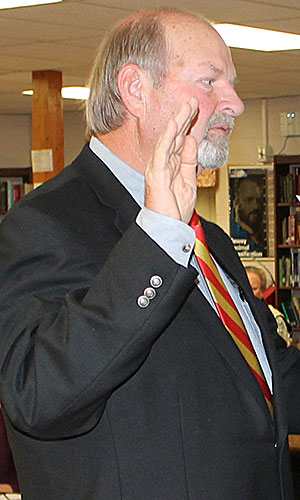 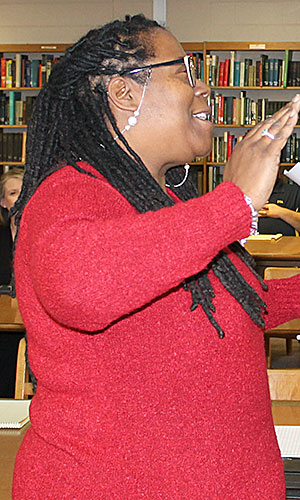 McNeal then nominated Smith-Wedley as the TLN representative. No other nominations were made and Smith-Wedley was also approved unanimously.

Another big item on the agenda was discussion for additional funding to upgrade and complete the old Jr. High auditorium building. The board, working with the city, procured funds through the Tennessee Municipal League Bond Fund for $3.825 million with an additional $750,000 coming from the school’s fund balance for a $4.575 million renovations project. Stigall Primary School received the majority of the fund, just over $3 million. Renovations to the Humboldt Jr./Sr. High School gym and football stadium received the least amount for funding. Renovation of the auditorium had $1 million earmarked.

Now that Stigall and HJSHS projects are complete, work began on the auditorium toward the end of 2017.

Thursday night, Dr. Versie Hamlett requested the board approve additional funding to complete the auditorium with some upgrades in the amount of $650,000.

“We’re in the process of renovations at the auditorium and would like to upgrade the original plan,” Dr. Hamlett told the board.

The auditorium would seat well over 500 people. The original renovation plan called for 299 new, plastic seats. The updated request was for 546 cushioned seats as an upgrade.

The upgrade also included a sprinkler system and upgrading the electrical system from an 800 amp service to 1,200 amps.

Coleman asked who requested the seating, in which Dr. Hamlett replied, some of the board members.

“That $650,000 could be used elsewhere, like computers for every student, or building a new building,” Coleman noted.
Smith-Wedley said she had gone over and over the funding in her mind and is 100-percent for improving where the children are now.
“I have no trouble allotting funds where children are involved,” Smith-Wedley added. “Let’s take care of our schools and ball fields first over upgrading where children are not involved.”

Coleman said she thought 299 seats was enough and asked if the city would be “chipping in” with the budget.

McNeal was for the additional funding in order to make the auditorium nice and would be great for the city, especially with Bongards’ Creameries expanding and Tyson bringing over 1,500 new jobs to town.

“Before this board, the (previous) board already approved it,” McNeal said. “Over half that money went to Stigall. We have already voted. We were going to tear it down. Then we talked about the gym and we kept it. We can utilize part of the building. We need somewhere to accommodate the people coming to our town. That money will come back to us.”

McNeal added that the $1 million could not be moved to other areas of the budget and added the school would lose that money.

After more discussion, McNeal called for question and a roll call vote. McNeal voted for the additional funding. Coleman and Smith-Wedley voted against it. McLemore said he agreed with the ladies and voted against it. Chairman Johnson said there was no need for him to vote since it did not pass. He then said he would have voted for the additional funding.

After the vote, the board agreed to hold a workshop to see what the next step would be. McLemore also suggested having someone from Lashlee-Rich attend to explain possible options.

In other school board business:

•Marcy Williams, represented Alexander, Thompson, Arnold, CPA presenting the 2017 audit report for Humboldt City Schools.
Williams began with the school district’s audit that had no findings. She praised the good work of Leanne Greene, bookkeeper for the Central Office.

The internal audit for each school revealed findings, most of which dealt with fundraising that were not abiding by state regulations.

Smith-Wedley asked if there is a written form to give to those in charge of fundraisers to follow the guidelines.

Dr. Hamlett said there is and all findings have been addressed. She noted there is an increase in monitoring as well.

During her presentation, Williams said almost all school systems will have findings since they deal with so many people handling money. All money collected is to be deposited in the bank the following day. She said it doesn’t mean money is being stolen; it is not being deposited in a timely manner.

•The board approved the school board meeting dates. According to board policy, meetings shall be held the first Thursday of each month if it falls after the 5th day of the month. Calendar dates can be moved if there is a conflict with meeting dates.