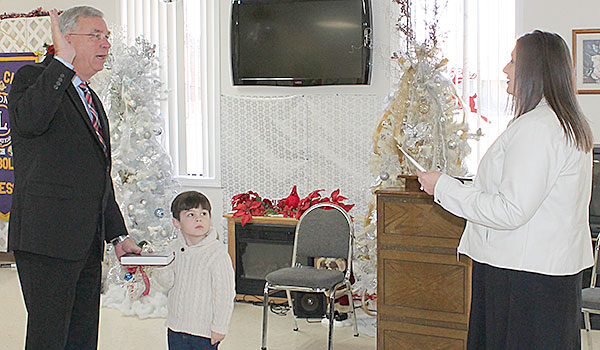 SIKES SWORN IN – Humboldt Mayor Marvin Sikes takes the oath of office during the swearing in ceremony held New Year’s Day at the Humboldt Senior Center. Clerk & Master Amy Brown administers the oath as Sikes’ grandson, Tanner Walker, holds the family Bible for his granddad. Mayor Sikes and all five aldermen were re-elected to office last November. All were sworn in last Monday morning to begin the new year.

A small crowd braved the frigid temperatures New Year’s Day morning to attend the swearing in ceremony for Humboldt City Board members. The mayor and all five aldermen were re-elected to office during the November election.

The ceremony took place at the Humboldt Senior Center at 10 a.m. Complimentary sausage and biscuits, and donuts were served with coffee, orange juice and milk for everyone to enjoy.

Mayor Marvin Sikes, now in his second term, thanked those who attended, mostly family members and close friends prior to being sworn into office.

Sikes thanked the board for four very good years of service and for working together. He had comments about each board member and the strengths they bring to the board table.

First Sikes thanked Leon McNeal. Sikes jokingly said he and McNeal had “butted heads” on a few occasions but they were always able to work through their differences. The mayor thanked McNeal for keeping him on his toes.
Next Mayor Sikes thanked Donna Johnson for “keeping the peace” at the board meetings. He said Johnson was the glue that holds the board together.

The mayor thanked Don Graves for his strength as a board member.

Mayor Sikes thanked Bob Pruett for always keeping a keen eye on spending, often questioning where and why dollars were being spent. Sikes said that’s important, keeping spending within the budget.

Lastly Sikes thanked James Shivers, who he called the “quiet” board member but is the one who is always level headed.

Prior to taking the oath, Mayor Sikes asked his grandson, Tanner Walker, to hold the family Bible for him during the ceremony.
Clerk & Master Amy Brown administered the oath of office to Sikes.

Brown asked the board if they preferred to be sworn in collectively as a board or individually. They agreed to take the oath individually.
Alderman McNeal suggested going in alphabetical order. But Alderman Pruett suggested letting Alderlady Johnson go first— “ladies first” he said.

“See how we all work together,” Mayor Sikes said with a chuckle.
It was a nice ceremony, short and sweet. With an experienced board returning for the next four years, Humboldt should continue to move forward.