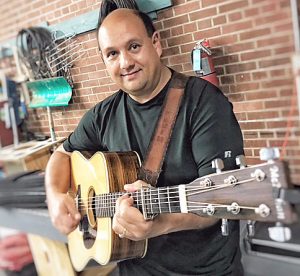 BLUEGRASS MUSICIAN – Humboldt graduate, Kevin Wright is an up and coming bluegrass musician with the band No Time Flatt.

If you are not a regular listener to bluegrass music, you may not have heard of the Tennessee Music Awards’ 2017 best bluegrass band No Time Flatt. No Time Flatt lists their hometown as Jackson, Tenn., but its guitar playing vocalist is Humboldt High School 1984 graduate, Kevin Wright.

Wright was raised just outside of Humboldt. He and his wife live between Humboldt and Medina, next door to his mother, Dr. Carolyn Stewart. By day, Wright is a banker, having started his banking career at Merchants State Bank (now Regions Bank) in Humboldt. He has worked for BancorpSouth in Jackson for 22 years.

“I’m not looking to quit my day job,” commented Wright. “Around 80-percent of bluegrass musicians are bi-vocational.”

Having a day job is not slowing No Time Flatt down though. Their 2017 schedule of events shows close to 50 performances including Picking on the Plaza, which took them to the Ryman, home of the Grand Ole Opry. Now, 2018 is filling in nicely as well. No Time Flatt has just confirmed eight shows for Dollywood June 7 -8, 2018 for the Dollywood Barbeque and Bluegrass Festival in Pigeon Forge, Tenn.

You may wonder how a Humboldt native found his way into the history books of bluegrass music, a music that is thought to have originated with mountain people. Wright grew up singing the old hymns of the church where he was raised.

When asked how he transitioned to playing guitar, and how he selected bluegrass as genre of music on which to focus, it is evident that the music picked him.

“I really got interested during my first year at Tennessee Tech, he explained. “I believe it was about 1984 and the guy who lived across the hall in my dormitory played banjo.”

Wright’s neighbor in the dormitory taught him three chords to back up “Froggy Mountain Breakdown” with a thumb pick and strumming with the back of the fingernails. They spent time at a local music store where they had bluegrass jams.  Additionally, while working with Betsy Autry at Tharp Brothers grocery store in Humboldt, she invited him to come to her father- in- law’s house and pick with her ‘banjo pickin’ husband’, Billy Joe Autry. That experience led Wright to being invited to be part of what would later become the Jackson Area Plectral Society.

Wright has now been a part of No Time Flatt for over two years as the band formed in 2015. This particular group is going places in the world of bluegrass music. The band performs original music, both contemporary and traditional, as well as music of some lesser known songs that are arranged with the No Time Flatt sound and brand.

In the spring of this year the band released their self-titled debut CD, which is being played on over 100 Bluegrass radio programs in the U.S., Canada and Europe.

The CD is sure to make you a bluegrass convert with such originals as “Dollarhide”. It is a song inspired by reference Loretta Lynn made in her second book to her cousin Lee Dollarhide. Dollarhide was a coal miner, moonshiner and chicken thief, because as Lynn said in her book, during that time, in that part of America, your choices were “coal mine, moonshine or move it on down the line.”

Dollarhide was written by the band’s bassist and vocalist, Patrick Cupples. Wright also has an original on the CD, an instrumental entitled “Roundup”.

If you would like a taste of homegrown bluegrass music, the No Time Flatt CD is available on iTunes, Google Play, Amazon Music and more. Samples of their music are available on their website www.notimeflatt.com. You can also listen to their entire CD by streaming it on AirPlay Direct at http://www.airplaydirect.com/music/notimeflatt/. 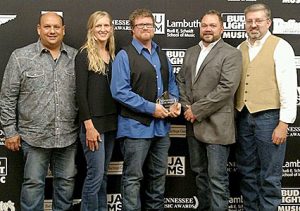