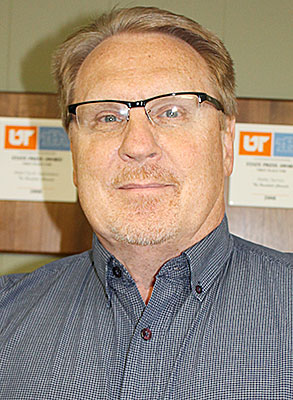 Wade has decades of experience in the newspaper field.

With the retirement of editor/publisher April Jackson last week, Wade has assumed duties as editor.

“I’m honored to be named editor of the Humboldt Chronicle,” Wade said of his promotion. “Our readers will notice little change, if any, with April’s retirement.”

“We were lucky to have the perfect fit for editor already on our staff,” Parkins said. “Danny’s love for the city of Humboldt and his dedication to the newspaper will make the transition seamless.  We’re very happy for Danny to serve the role at editor.”

“I’m proud that Danny Wade will be stepping up as the editor of The Chronicle,” said Jackson. “Danny has a homegrown love for the city and has been part of the newspaper operation since he was a teenager in the pressroom.”

Wade had served as the newspaper’s managing editor and associate editor since the 1990s. He got his first taste of the newspaper business as a teenager, still in high school. As a ninth grader, Wade worked after school a couple of days a week in the mailroom and pressroom.

“Over time he has grown into so many roles,” Jackson said. “When his boys begin playing City League basketball, Danny added reporting and photography to his skill set. From the pressroom to the newsroom and through all the technical advances over the years Danny has played a bigger and bigger role at the newspaper. He will assure the Humboldt Chronicle serves its readers well going into the future.”

“I can honestly say I’ve performed every phase of the newspaper business there is, from a pressroom assistant, to head pressman, in the mailroom, as a journalist and photographer, in the darkroom, in advertising, managing editor and now as editor,” Wade said of his 44-year career. “The newspaper industry is the only business I’ve ever known.” 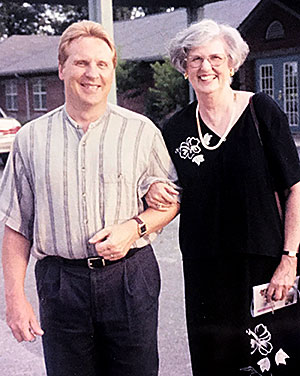 Danny Wade and the late Martha Dodson
back in 1998

Along Wade’s career he has seen many fellow staffers come and go. But two in particular stand out and help mold his career.

“Martha Dodson and April Jackson taught me more than you can imagine,” Wade said of two of his previous editors. “Martha taught me as much about life and how to treat others as she did about journalism. To this day, I’ll always remember how she would focus on good news. She said she learned that from J. Frank Warmath. ‘People want to read good news’, she would say.”

Jackson gave Wade his first opportunity to move from the pressroom and into the newsroom.

“April told me she thought I would be better with the newspaper instead of a pressman,” Wade recalled.

“April molded me into the writer I am today. And I’m still learning,” he laughed. “She simply has a way with words. When I would submit an article, she’d pull out her red pen and go to town on it. I could always depend on her suggestions and changes to make my articles better. I will miss that now.”

“Being the editor of a small town newspaper isn’t always easy,” Parkins said. “Danny will be fair and professional in all that he does.”

“I can’t do it on my own—it takes all of us,” Wade said of producing a newspaper. “Lee Ann Butler, Kim Forbes, Barry DeLoach and myself will continue to put out a quality newspaper with local news and shine a bright light on Humboldt. We are not just a staff, we are family.”