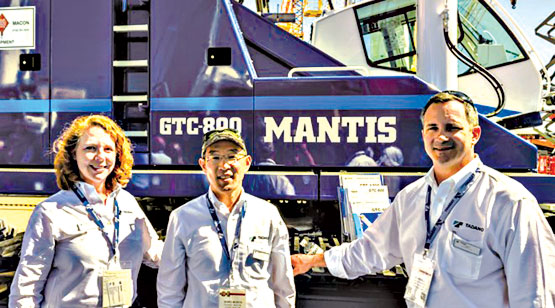 (Editor’s Note: Julie Smith Fuller is a native of Humboldt.)

Courtesy of ACT –American Cranes & Transport
Only a few women have reached the upper echelons of management in the crane industry. Julie Fuller is one of them. As vice president/officer of engineering and purchasing for Tadano Mantis, Fuller is one of the sharpest and smartest individuals in the business. While she landed in the crane world completely by chance, she has stayed in it for more than 20 years for a lot of good reasons.
Fuller graduated from Tennessee Technological University in 1995 with a Mechanical Engineering degree. She spent that summer looking for a job, sending out blind resumes to all sorts of companies. Mantis responded, and she was offered a job as a contract employee. A month later she was offered the positon of junior engineer.
“I’ve always enjoyed working on this product – it is complex and challenging,” she said. “And with Mantis being a small company there were many opportunities to learn and grow.”
She was promoted to chief engineer in 1999 and vice president of engineering in 2006. When Tadano purchased the company in 2010 some restructuring took place, and Fuller was named general manager of engineering. In 2013 she was promoted to vice president of engineering, and she was named vice president of engineering and purchasing in 2014. 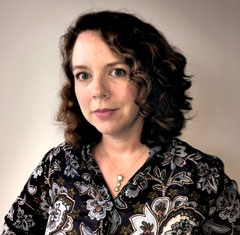 “We first met a few years ago at Bauma. I found her to be interesting and easy to talk to. Plus we had something in common– being a woman in the crane business. But while I write about cranes and continually try to understand how they work, she designs cranes and comprehends every element of these amazing machines.”
But being a woman in the crane industry has not been a huge deal for her, and once customers and colleagues get to know her it’s a non-issue. While she will never really be “one of the guys,” she will always hold her own.
Fuller has been successful in the crane industry because she is an expert in her field. She is driven and ambitious and she loves what she does. She is deeply engaged in the telescopic crawler product, and she copiously studies the competition and the market. I think you will be interested in Fuller’s point of view.
What is it that keeps you engaged in the crane industry?
“There are always new challenges. The teleboom crawler market has developed and expanded so much in the 20-plus years that I’ve been involved. New competition pushes everyone toward new products and innovations. The GTC series has been a major accomplishment for Tadano Mantis and it’s exciting to continue looking forward and planning for the next generation.”
What is the most challenging aspect of your job?
“The breadth of responsibilities. We are still a small group and I have a lot of day-to-day responsibilities, not just management. Product development, product improvements, special features, cost reductions, developing new suppliers, improving our supply chain. It’s a lot to keep on top of.”
How do you describe the market for telecrawlers?
“Growing and changing. I hear many people talking about telecrawlers as a new part of the crane market and I am always a little surprised – because I’ve been in this business for over 20 years. But it is true that the telecrawler has become more main stream and not just a niche. More manufacturers are producing tele-crawler models and are expanding the capacity range. More users are looking at telecrawlers instead of other types of cranes or equipment.”
What is it that distinguishes tadano mantis in the market for telecrawlers?
“Mantis cranes were always designed to be telecrawlers and that mindset has shaped our design philosophy. We assume the lift conditions are not perfectly level and we assume users will pick a load and travel. We assume there will be mud, soft ground conditions and challenging terrain. We have never designed a crane to just meet standards. We have always worked closely with our customers on improvements, special features and applications and understanding the real world conditions where the cranes work.”
Tadano Mantis will be at ICUEE. what is tadano Mantis’ history in the utility market?
“Tadano Mantis cranes have a long history with the utility market going back to the mid-1990s. The utility market was the focus of the first Mantis models outside the storage tank market and it has shaped the performance targets, design and options offered on models into the present day. ICUEE has always been an important show for us. We’ve exhibited for over 10 years and introduced several new models at this show.”
What are the challenges of being a woman working in a very male-dominated industry?
“The biggest challenge is having people recognize and understand what I do and why I do it.
I’m not what people expect when they think vice president of engineering of a crane manufacturer, so there’s often a learning curve when I make new contacts. Most people get their head around it pretty quickly when we start discussing the product, but there are always those times when things take longer than they should.
One story I have is about a meeting with a potential vendor at a trade show. Two of my male colleagues and I metwith this supplier and it was clear the supplier had a hard time understanding I was the technical expert. The supplier would look at my male colleagues and ask questions about our product and requirements, and my male colleagues would look at me and I would answer. And then the supplier would ask the guys the next question. Honestly, it was funny, even at the time. I try to keep a sense of humor about it.
The understanding of “why I do it” has been more difficult. There is a perception that women don’t have the same career goals as men and are content to work hard and be part of team without wanting to lead, be promoted or be recognized. Or that a male-dominated environment is too tough and women don’t want to work in these industries. I don’t believe this is true – it’s certainly not true of me. I have been working primarily with men since I was in college. I have been the only woman at the table in meetings for most of my career. I rarely think about it anymore.
Yet I have had people over the course of my career, who have worked with me for years, suddenly say, “You really do enjoy this don’t you? It really means something to you,” like my drive and commitment were somehow surprising. I’ve been very lucky to work with and for managers who saw my abilities and potential and were willing to give me a chance.”
What is your personal business philosophy?
“Have big goals. Respect the people you work with. Realize that failure is a part of success. Focus on what is really important. Be honest with others and yourself. Own it. Be committed. Be responsible.”
What do you like to do when you are not working?
“Reading, hiking, spending time with family.”
(Reprinted or posted with the permission of American Cranes & Transport Magazine. Copyright 2017.)