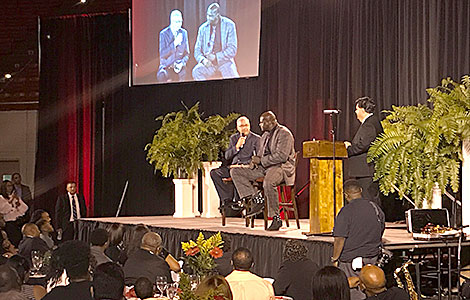 SHAQ AND THE MAYOR – NBA legend Shaquille O’Neal was the keynote speaker Saturday evening at the Vikings Athletic Gala held at Oman Arena in Jackson. Toward the end of the program, Humboldt Mayor Marvin Sikes joined O’Neal on stage where he presented him with a key to the city. 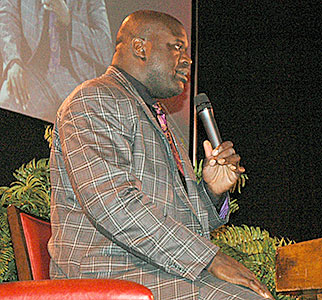 O’Neal takes the stage gala where he was keynote speaker. Shaq’s speech focused on a message for the kids to always believe in themselves. A large portion of the program was a Q&A session, mostly with kids taking the stage beside O’Neal with their questions for him.

“I got a call on my red phone at my house, the red phone is for family and friends,” O’Neal said Saturday evening before taking the stage at Oman Arena. “Ron Abernathy, my coach at LSU called me and said, ‘Hey, I’m working in a county school in Tennessee. I need you to help me out with a fundraiser’.”
O’Neal praised Abernathy saying his former coach was instrumental in the basketball star becoming the character known as Shaq.
O’Neal obliged and came to Humboldt headlining the gala and basketball camp earlier that morning. He said he wanted to show his support and help the children out any way he could.
When asked what role Abernathy played in his life, O’Neal replied, “Education! education is very important in your life. Like I tell kids all the time, it’s ok to be big, rich and famous but you have to have education to maintain. I try to walk the walk as talk the talk.”
One lesson he learned from his mom about education came when she asked the young Shaq to go to the store with her. She then asked him to balance the check book, which he could not do. O’Neal said he realized he was not ready to become a professional.
“I wasn’t the smartest kid in the classroom, which probably means I wasn’t going to get an educational scholarship. So I had to use being an athlete to get to college,” Shaq said of means he used to get his education. “Now that I’m in college, I have to find my way to get to the professional level. Now that I’m a professional I have to find my way to remain a good citizen. A lot of people use different means to educate themselves.”
O’Neal said he tells kids all the time that it starts within and to always respect your parents, always respect your teachers, always respect your parents. Respect everyone.
For close to two years, coach Abernathy and O’Neal had tried to plan for the NBA star to come to Humboldt for their athletic banquet but scheduling was difficult for a celebrity who co-hosts a basketball television show, has his own shoe line and is the face of so many products in commercials. But eventually a date was worked out and the ball was rolling.
Humboldt City School superintendent, Dr. Versie Hamlett, used the professional services of Cesar Quispe to assist along with several of the school staff with the planning and promotion of the gala. Hours and hours were committed to making the gala the best event ever for Humboldt athletics.
Sponsorship packages were sent out to area businesses with the top level including a meet and greet with Shaq, dinner served on the Oman Area floor and the best seats in the house. Lower level sponsorships were available as were general admission seating.
O’Neal agreed to assist in a basketball camp as well. Viking coaches and players ran the camp. O’Neal came in a spoke to the kids, not about basketball but about life and the importance of getting a good education. His main message was to believe in yourself.
“Believe in yourself and anything is possible,” he told the campers.
Pictures of each attendee with the NBA star were made during camp. This interaction with the kids brought the biggest smiles you’ve ever seen.
O’Neal continued this line of thought as he spoke at the gala. His opening focused once again on education and self belief. Then he opened it up for some questions and answers. At first there was little participation with only a couple of questions. Then the kids got involved with the Q&A. Kid after kid came onstage, sat next to  7’1” Shaq and asked him a question. Each time a kid came up, he asked them to say their name and what they want to be when they grow up. Many wanted to be in the NBA and were told to believe in themselves and work hard by O’Neal.
At one point of the gala as the scheduled time was nearing the end, emcee Tyler Hawks was beginning to wrap up the program. But Shaq wasn’t finished hearing from the kids. For the next 30 minutes or so, more and more kids came on stage with their questions for the superstar. Dozens of kids, young and old, had a thrill of a lifetime meeting Shaq, sitting beside him and chatting. 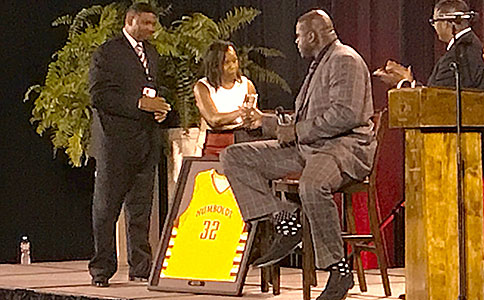 At the end of the program, Humboldt Mayor Marvin Sikes came onstage and praised O’Neal and everyone who made the gala a huge success. He presented O’Neal with a key to the city.
Next, Jackson mayor, Jerry Gist, also gave O’Neal a key to the city.
Gibson County Sheriff Paul Thomas walked on stage and noted O’Neal’s support of police. He gave O’Neal a badge and made him an honorary member of the sheriff’s department.
“The Vikings Gala held on Saturday, September 23, 2017 was a wonderful evening for the Humboldt City Schools’ athletic programs,” Dr. Hamlett stated. “The evening, featuring Shaquille O’Neal, was overwhelmingly supported by the community as we came together to strengthen the future of our students. The entire staff and faculty of Humboldt City Schools worked together to offer this wonderful event. We are forever grateful for your support!”
It was a great day in Humboldt and in Jackson last Saturday to host one of the biggest basketball superstars in the world, Shaquille O’Neal. Thousands of dollars were raised for Humboldt athletics that will be used support all sporting programs for Humboldt kids.