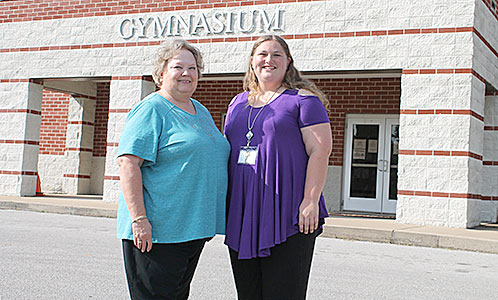 Holiday Mart in Humboldt has become a tradition over the past decade plus. The Humboldt Business Women’s Club biggest fundraiser kept growing and growing each year.
This year Holiday Mart will have a new civic club overseeing the Humboldt event. Junior Auxiliary of Humboldt will adopt Holiday Mart.
“We have several projects going on and wanted to pass Holiday Mart on to someone else,” Humboldt Business Women’s Club past president, Lynn Allen said last week. “Junior Auxiliary immediately came to mind.”
Katie Kulow, president of JA, was contacted to see if they wanted to take it over.
“They called and said they couldn’t continue and wanted us to take it over,” Kulow recalled. “We were looking into other ways to raise funds to support our service projects. It was a unanimous vote.”
This year’s Holiday Mart is slated for Saturday, November 11.
The first Holiday Mart in Humboldt was held in 2004, recalled Allen. It was held at the old armory building on Elliott Street for the first two years. Those years there were 25 to 30 vendor booths. The third year Holiday Mart moved to East Elementary School in the cafeteria since it continued to grow.
Before long, they outgrew the cafeteria and began using the gymnasium too. The past few years Holiday Mart has averaged around 65 vendor booths.
“Vendors love the low cost and being inside where it’s cool,” Allen added. “The (Business Women’s) club only receives the (booth) rental fee. Vendors keep all their sales.”
Kulow said JA plans to keep things the same this year as well where a 10×10 booth is only $25. Allen noted most vendors thought the rental fee was very inexpensive compared to other locations they rent booth space.
“Vendors are free to be creative,” Allen said. “Some bring in lattice, curtains to decorate their booth.”
Allen also noted some vendors will rent more than one space, some getting two or more spaces to make one big booth area.
There will be a wide variety of wares for sale during Holiday Mart. Some booths will sell food items such as fried pies or fudge, jewelry, arts and crafts, vinyl products, kitchenware, boutique items, cosmetics, candles, children’s items, holiday décor and a little bit of anything and everything.
Concessions are also available for both breakfast and lunch.
“We’re looking forward to building on what they started,” Kulow said of attaining Holiday Mart. “We want to continue to grow it into an annual event, to bring people to Humboldt. Our goal is to stay steady this year and keep it the same as in the past. Maybe later, we might mold it to fit us (JA) and continue to build on it.”
Kulow said all proceeds from Holiday Mart will go toward JA’s service projects to help the kids of Humboldt.
The 17th annual Holiday Mart will continue to be held on the second Saturday in November and run from 8 a.m. until 2 p.m.
Junior Auxiliary and the Business Women are working closely together to make sure the transition from one civic club to the other is a smooth process. Holiday Mart will be the same as always, only this year there were be a new organization managing the event. Both clubs invite everyone to mark November 11 on your calendar and attend Holiday Mart this year.