The Gibson County Pioneers had their work cut out for them this past Friday night in the district match-up against the Adamsville Cardinals in Adamsville.

During the first quarter the game had about a 30-minute delay due to the lights going out in the stadium.

The Pioneers won the coin toss and chose to receive the ball. The Pioneers’ offense had trouble moving the ball and was forced to punt. The Pioneers defense made the Cardinals putt on their opening possession, also. Gibson County went three plays and out on their next possession. Adamsville wasted no time in scoring on their second possession on a 58-yard run to take 7-0 lead.

With 2:53 remaining in the first quarter, GC defense forced a fumble and was recovered for touchback by Deondre Snow. Gibson County started the drive from the 20-yard line. Pioneer quarterback Will Cantrell completed a 33-yard pass to Caden Wylie to the 40-yard line.

Gibson County was forced to turn the ball on downs after failing to convert on fourth down three, but during the drive GC quarterback Cantrell was hurt and did not return for the remainder of the game. Adamsville had a 7-0 lead to end the first quarter.

Adamsville scored two touchdowns in the second quarter, one off a three-yard run and the other on a 15-yard pass. With 18 seconds left in the second quarter, Colin Warren incepted a pass and returned it back 36 yards to the 17-yard line. The Pioneers move the ball down to the six-yard line but time ran out before the Pioneers could score. Adamsville took a 21-0 lead into the locker room at half time.

Adamsville open up the third quarter with a six-yard run for a touchdown and then scored another touchdown on a 32-yard pass to take a 35-0 lead at the end of the quarter.

Gibson County started the fourth quarter with Colin Warren returning a kickoff 38-yard to the 47-yard line. The Pioneers moved the ball down field picking up three first downs with runs from Payton Lamberson, and Ozzy Rico and catches by Camron McMackin and Wylie moving the ball to the 21-yard line. Gibson County quarterback Payton Lamberson completed a 21-yard pass to Austin Little for a touchdown with Henry Todd extra point kick to make it 35-7 Adamsville.  The Cardinals added a touchdown to make it 41-7 for the game’s final score.

The Gibson County Pioneer Player of the Week was Austin Little, a senior running back and defensive back. He had six tackles, one reception for a 21-yard touchdown and two rushes for two yards. See GCHS Scoreboard below sponsored by Siler Thornton Agency.

Leading Gibson County’s offensive was Caden Wylie with five receptions for 66 yards; DeAndre Snow with one reception, 25 yards; Donte Holder, a reception, 11 yards; and Ozzy Rico had nine carries for 27 yards. Quarterback Payton Lamberson completed seven of 12 for 87 yards with a touchdown. Henry Todd was one of one for extra point and average 28.5-yards per kick off with six punts for 231 yards. Colin Warren had three kickoff returns for 70 yards.

The Pioneers will face West Carroll High School at 7 p.m 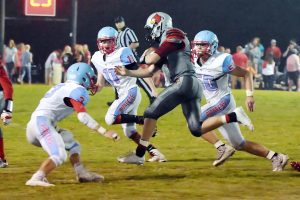