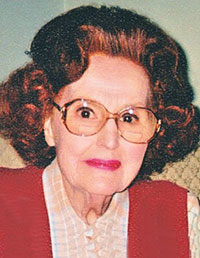 Margaret Elizabeth (Booker) Brown, a long-time Newbury, Mass. resident, passed away peacefully at Sea View Retreat, Rowley, Mass. on Thursday, August 31, 2017.
She was predeceased by her husband, Carl A, Brown, in 2010.
Mrs. Brown was 94 years old, and had lived with fierce independence until suffering a series of falls in the last several months.
Born in Gadsden, Tenn., Mrs. Brown was a true Southern belle — a steel magnolia from a long line of steel magnolias. She was the daughter of the late William Branch Booker Jr. and the late Nannie Myrtle (Richardson) Booker of Gadsden. She was also predeceased by her brother, William B. Booker III of Gadsden.
Although she left the south when she married her husband of nearly 66 years, she never lost her southern accent or her gracious southern ways.
Mr. and Mrs. Brown considered theirs to be a true love story for the ages: they met during World War II at Vanderbilt University in Nashville, Tenn. where he was in officers’ flight school training and she was completing a bachelor’s degree in education at George Peabody College for Teachers.
They were married in Tucson, Ariz., shortly before Mr. Brown was deployed overseas as a bombardier in the Pacific. She taught elementary school back in Gadsden while he flew some 18 bombing or troop supply missions. When the war ended, they moved “up north” to Newburyport, Mr. Brown’s hometown.
Mrs. Brown worked as a substitute elementary school teacher in Newbury and Newburyport for short periods for several years (fascinating her young charges with her Southern accent and her perfectly “poofed” bouffant hairdo). In 1956, the family moved to High Road in Newbury, where Peg remained until 2017.
Her interests revolved around her roles as wife, mother, and homemaker. Tennis with her life-long Newburyport friend, Janet Pratt, bridge parties and volunteer work for the Anna Jaques Hospital and activities at the Oldtown Country Club were also important parts of her life.
Many Gadsden relatives would visit Newbury several times a year, and every summer, her family would return to Tennessee for extended visits with her mother and brother, great-aunts and great-uncles, cousins and family friends.
In later years, Mrs. Brown delighted in her grandchildren and great-grandchildren and their pets. She enthusiastically followed all their school, sports, career and family activities and was a well-spring of advice and life-lessons.  She always had a kind word, a cookie (or dog biscuit), and a hug to make things better.
Mrs. Brown is survived by her daughter, Melinda (Brown) Everett and her husband, Leo “Vin” Klos, both of Newburyport; and Melinda’s sons, Philip A. Everett and his wife Rebecca of Portland, Maine, and Jeffrey S. Everett and his wife, Kelly Gill, and sons, Max and Alex, all of Derwood, Md.; by her daughter, Dale (Brown) Fernald of Newbury; Dale’s sons, Thomas K. Lucy and his wife Moriah and their children, Carolyn and Carl, all of Newbury, and Michael E. Lucy and his wife Amy, and their children, Samantha, Kate, and Brian, all of Newburyport.  She is also survived by many cousins and life-long friends, both locally and in Tennessee.
Mrs. Brown’s family is forever grateful for the care, concern, professionalism and compassion she experienced while at Sea View Retreat. The family could not wish for a better or more caring team. They will always hold them in their hearts, as they do Peg.
In lieu of flowers, memorial contributions are suggested to: Gadsden United First Methodist Church, C/O/ Mr. Junior Holyfield, 19982 Highway 79, Gadsden, TN 38337, or to a charity of the donor’s choice.
Arrangements are by Elliott, Woodworth & Rogers Family Funeral Home, 35 Green Street, Newburyport, Mass.