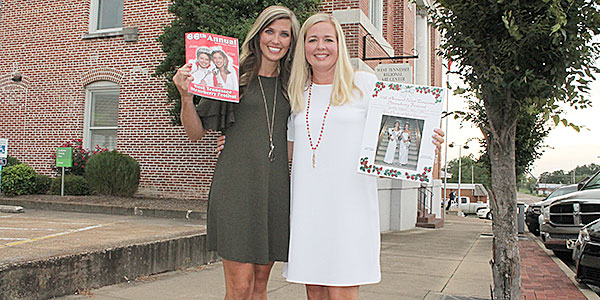 It’s August and several months away from the 81st West Tennessee Strawberry Festival, but festival planning is well underway. That is why festival president, Melissa Swingler, proudly announces this week that Chelsea Caraway will serve as general chairman for next year’s Strawberry Festival.

Swingler said as soon as her brother, Ashley Culpepper, asked her to be his general chairman last year, she began thinking of whom she would ask.

“I immediately I thought of Chelsea,” Swingler recalled. “We (Swingler and her brother) talked about it. After the festival was over, he would call and ask if I had talked to Caraway yet.”

Swingler wasn’t sure exactly how to approach her good friend for such an important position with the festival. She also noted Caraway is a teacher and wasn’t sure if her schedule would allow dedicating so much time to the festival.

Prior to Swingler asking Caraway, the two had joked with each for years as to who the future general chairmen would be each year, both saying it would be the other.

“It’s something I’ve always I wanted to do,” Caraway said of being general chairman and president the following year. “Before I said yes, I had to talk to my principal.”

Caraway and Swingler talked and discussed all the responsibilities involved with overseeing the Strawberry Festival. Caraway said it was a lot more than she expected.

“I talk with my principal (Steve Maloan) and told him about the festival, how big it is and what it required,” Caraway said. “It’s a two-year commitment. He said, ‘Go for it, we’ll work it out’.”

While on a family vacation recently with her family at the beach, her mother, Lujuana DeBerry, asked Chelsea who she thought Swingler would asked to be her general chairman. “It’s not you or Gary?” her mom asked.

“I said ‘no’, because I hadn’t been asked yet.” Caraway replied. “I said it will come out in the paper soon. When I got Melissa’s text, I thought my mom will think I lied.”

When selecting a general chairman, the president looks for certain qualities in perspective candidates. Swingler said she knows how much the Strawberry Festival means to Caraway, making her the perfect general chairman.

“She’s involved,” Swingler said. “We’ve worked together on Opening Ceremonies. She took over the Jr. Hostess committee. We’ve worked on floats together. She’s creative and has great ideas.”

Swingler noted that both of their families have two children and they all will enjoy spending time together.

“I’m very passionate about the festival,” Caraway said. “I’ve been involved forever. My parents built floats. I’ve been in the Jr. Hostess (royalty). Going forward as a cheerleader in high school we were in the parade and I’ve been in the Hostess Princess court.”

Both Caraway and Swingler were crowned Hostess Princess of the Strawberry Festival when attending Humboldt High School.

Caraway said now that she is out of college and has started a family, they are still involved with float building and working with committees.

“It’s a big responsibility,” Caraway said of leading the festival. “But the committees do their jobs and make the events happen.”

“I know she will do a good job,” Swingler said of her sidekick. “She’s organized. The festival is in good hands.”

As for now, the duo hasn’t discussed many of the events for next year’s festival. Lately they have focused the upcoming Soy Bean Festival and getting prepared for royalty pictures in September.

Both are committed to keeping the traditions, getting young families involved and keeping the momentum going that has been building over the years.

When asked what their favorite event is, both Swingler and Caraway said the Grand Floats Parade on Friday.

“The parade is a classic event,” Swingler said. “People from out of town come to Friday’s parade.

Last year’s Grand Floats Parade almost didn’t happen. The near 100-percent threat of rain didn’t put a damper on the parade as the sky opened up for a pleasant, rainless morning.

“I was so sad for Ashley,” Swingler said of her brother and the threat of raining during the biggest event of the week. “Ashley put so much into it. I would have hated if it got rained out. After all the work everyone had done, I’m so glad he got his parade.”

But for now, the former beauty queen duo is taking things step-by-step, but without the tiaras, scepters and robes—now as the leaders of the Strawberry Festival.

“I’m excited,” Caraway said. “I’m honored Melissa thought enough of me to be her partner. I’ve always wanted this. I’m excited and ready to get going!”