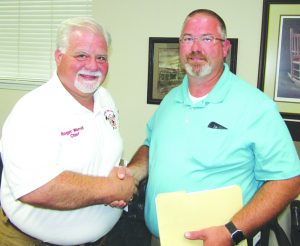 Dyer City Board members met last Monday night, appointing one of their own as the new city fire chief. Alderman Ryan Shanklin resigned the city board and accepted the job as chief of the Dyer Fire Department.

Ray Carroll made the motion to appoint Shanklin. Carroll said after interviewing able and qualified candidates, the board thought Shanklin would serve the community best. Shanklin will take over the job effective July 1.  He is the former Gibson County assistant fire chief

“It’s a shame that its flooding like this since it is the nicest station that we have for the county,” said Witherspoon. He said EMS Director Star Arnold came to Dyer to inspect the station and was shocked to see the damage caused by the flooding.

Alderman Tom Mikkelsen asked if Arnold would allow her people back into station four. “We are okay to move back to station four for as long as there is a plan to move forward, perhaps, working with the Army Corps of Engineers,” said Witherspoon.

Younger said at the next board meeting he plans to bring a list of potholes that need to be fixed. “It’s going to be quite pricey,” he said.

Dyer Fire Chief Roger Worrell reported that the Don Corbin turned in his gear and left the department. Worrell also reported that they had a good dedication service last Monday for the helipad.

Ray Carroll made a motion that the city hire Jason Cantrell as a seasonal worker and it was approved.

Mayor Chris Younger read Kevin Hurley’s resignation to the board. Since he resigned he has come back to the board asking to be reinstated. The board voted not to accept his resignation so he will return to work on Wednesday June 28th 2017.