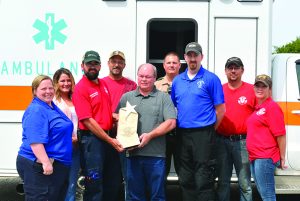 Gibson County local emergency personnel were recognized at the ninth annual EMS Star of Life Award Dinner and Ceremony at the Rocketown in Nashville recently.

They received the EMS Star of Life Award for their work while saving the life of Timothy (Tim) Smith who was critically injured in a vehicle accident on Gann Road last September.

The EMS Star of Life Awards honors the dedication of those who provide the day-to-day lifesaving services. The ceremony presented the actual patient scenarios and reunited the EMS caregivers with the individuals they treated.

“I am very proud of my paramedics and the first responders who tended to and assisted in saving the life of Tim Smith. We have a dedicated team of highly trained men and women that go the extra mile every day. Gibson County should be proud to have dedicated and trained personnel in our community working for us,” said Gibson County EMS Director Starr Arnold.

On September 19, 2016 Timothy (Tim) Smith of Bradford was running some evening errands when disaster struck. As he approaching his home, he felt something break on his vehicle Honda SUV and he immediately lost control of his steering and began to drift toward the side of the road. He went off the road into the ditch where the vehicle rolled several times after hitting a culvert and landed in the middle of the road on its side.

Gibson County Central Control at 6:19 p.m. dispatched Gibson County EMS Medic 3, and Gibson County First Responders–Station 4 Gann Fire and Rescue along with Gibson County Sheriff’s Department and Tennessee Highway Patrol Trooper to an accident at 923 Gann Road outside of Bradford. Gann first responder AEMT Jessie Shanklin and EMRs Cindy Shanklin were first on the scene within a minute. “I just happened to be at the right place at the right time. I was less than a mile away when we got the call,” said AEMT Jessie Shanklin. Arriving on the scene they found a single MVC rollover with heavy damage with patient Tim Smith turning blue. They assessed the patient and found a contusion, or bruise, developing over the center of his chest, lacerations on his cheek, right hand and knee, but no other obvious injuries but he continued to turn blue and stopped breathing. AEMT J. Shanklin knew something wasn’t right and called for a helicopter to transport patient to a Level I trauma center.

Upon arrival of GCEMS Medic 3 Paramedics Chip Doyle and Tracy Callahan, they assessed the patient was having multiple episodes of turning blue and purple and then passing out. With his respiratory symptoms, they suspected a possible lung injury; however, breath sounds were clear and equal and oxygen saturation was 100 percent. After removing his shirt in the ambulance, they found a weird mottling of the skin in the center of his back. His mottled back and pale color suggested that he was having a problem with his heart. As time passed everyone felt the urgency to get him to a Level I trauma center.

Air Evac 007 Flight Nurse Emily Pecaitis, Flight Paramedic Ross Roberts and pilot Aaron Myers were dispatched and on the scene within 25 minutes. Upon entering the ambulance they did their assessment putting all the signs together, and they were extremely concerned for the possibility of a cardiac injury.

After a 45 minute flight to Regional One, they rolled the patient into the trauma hallway where a nurse and physician met them and performed a triage assessment. After patient assessment and diagnostic testing revealed a sternal fracture and large pericardial effusion, that’s blood in the sac around his heart, emergency surgery was needed. Smith’s pulmonary artery and right ventricle had been damaged in such a manner that the full repair of his injuries could not be completed at Regional One Health. He had to by transported by ambulance to nearby Methodist University Hospital to complete the surgery.

Smith was discharged only eight days later to go home and return back to work in three months.

He would like to thank all Gibson County First Responders, Sheriff’s Department, Tennessee Highway Patrol, and Air Evac Lifeteam 007 for all their the lifesaving efforts that night to save his life. Also a special thanks to his family, friends and co-workers for all their support during this time.

During the EMS Star of Life Award Ceremony, Director Tidwell presented Tim his “Certificate of Life” that reads: “It is hereby certified and solemnly attested that Timothy Smith survived a life-threatening event on September 16, 2016. This certificate commemorates the first day of the rest of your life.”

In his nomination Jonathan Wood, the program director at Air Evac Lifeteam 007, wrote, “This run is a perfect example of the impact that can be made on patient and family by highly trained medically proficient providers that understand their roles as patient advocates. From the initial call to the patient arrival in surgery, clinical decision-making, teamwork across agencies, excellent communication and true concern for the patient led to this patient returning to his life and family. This display of patient-centered attitude assured that Smith was correctly navigated through the EMS system from moment of contact with First Responders until the moment he was on the Shock/Trauma table at the closest Trauma Center.”