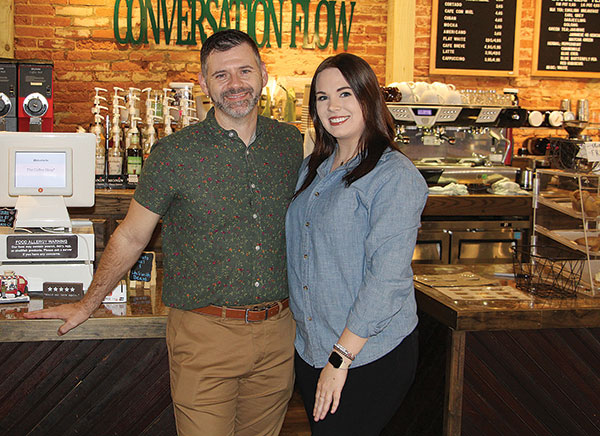 In December of 2017, Guy and Tammy Causey purchased a downtown building with dreams of creating a cozy place for people to socialize and enjoy a good cup of coffee. After month of remodeling, The Coffee Shop was opening in September of 2018. People from all over West Tennessee gravitated to The Coffee Shop, not just for coffee, but for their sandwiches, soups and salads, and desserts.

Now, four years later, the Causeys have sold the downtown eatery. The Coffee Shop had been on the real estate market for a few months and drew lots of interest, but no buyers. Not until Lauren Martin and Justin Romero came along. The couple fell in love with it and knew this was exactly what they wanted.

The Causeys had the advantage of calling Humboldt their hometown for many years. When they opened The Coffee Shop, most everyone knew them. Now, Romero and Martin, who are not from Humboldt, will have to get to know Humboldt and those who live and work here. And, they have hit the ground running.

“I began working part-time at The Coffee Shop last November,” Martin said of how they became owners. “I got close with Guy and Tammy. It all came together and now we’re here. We signed the papers on December 27th and opened on January 3rd.”

“We had the privilege of working with Lauren before it happened,” Tammy Causey said of the first steps of the sale journey. “We met Justin and they are both fantastic people. The Coffee Shop is in good hands.”

The young couple are no strangers to the coffee business. Romero managed a Starbucks in Jackson, Tenn. and Martin managed Java Café, a local coffee shop in Dyersburg, Tenn.

“We were looking to open a fast-casual to bring to Jackson,” Romero said of their entrepreneur venture. “But, the numbers kept changing—it didn’t fit. We have a passion for coffee. Everything worked out.”

Martin and Romero fell in love with Humboldt’s downtown area and The Coffee Shop building. They both love being a part of all the quaint little shops in downtown.

The Causeys had several potential buyers look at the restaurant but for one reason or another, none offered a contract. When Romero and Martin were wanting to buy the shop, Tammy Causey said they were the perfect fit.

“Our main goal in starting the shop was to bring God honor in opening it, operating it and selling it,” Causey said. “It was His, is His and in my heart will always be His.”

“The menu will stay the same,” Romero said. “We’ll use the same vendors as well.”

“We’re still going to have ‘Guy’s Smashburger’ and Tammy’s Brownie Delight’ on the menu,” Martin noted of a way to pay homage to the founders.

For the most part, nothing will change, but next month, they plan to extend their days and hours of operation. In February, The Coffee Shop will open for Sunday brunch from 10 a.m. until 2 p.m. The shop will also open on Mondays with their regular hours of 7 a.m. until 2 p.m. In March, they plan to stay open later on Thursdays, Fridays and Saturdays for the diner crowd. With these extra hours, they will be hiring additional staff.

Martin and Romero want to do something special for the Causeys and will host a reception for the original Coffee Shop owners. The reception is slated for Thursday, January 19 at 1 p.m. Not only will this be a time to reflect on the Causeys’ dream of opening The Coffee Shop, it will be a time for the Humboldt community to get to know Romero and Martin.

If you are a regular customer of The Coffee Shop, or maybe it has been a while since you walked through the doors, new owners Romero and Martin invite everyone to stop in. This would be the perfect time for you to welcome them to Humboldt and congratulate them as new business owners in the heart of downtown Humboldt. Cuppa Joe and bon appétit.