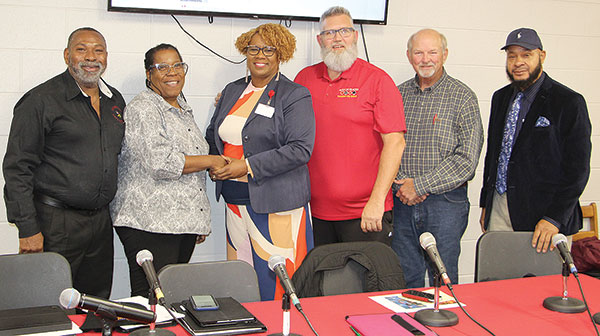 UNITED BOARD – The Humboldt School Board wanted to make sure director of schools, Dr. Janice Epperson, remains under contract a little further in the future. Board members (from left) Leon McNeal, Valeria Wedley, (Dr. Epperson), Mark Hodge, Wayne McLemore and Terry Johnson all voted to extend Dr. Epperson’s contract.

When Dr. Janice Epperson was hired as director of Humboldt City Schools over a year ago, she accepted a 4-year contract. Now with almost a year and a half under her belt leading the school system, board members believe she deserves an extension.

The first item on the Humboldt School Board’s agenda last Thursday evening was to extend Dr. Epperson’s contract for two years. She is currently in her second year of her current contract. The extension would make her contract valid through June 20, 2027.

Dr. Epperson had said prior to the meeting that she preferred to have an extension as opposed to drawing up a new contract.

Board member Terry Johnson added that Dr. Epperson has done a great job.

Board chair, Valeria Wedley, echoed the sentiment of McLemore, McNeal and Johnson. Wedley said she witnessed first hand of how students, under Dr. Epperson’s leadership, are eager to learn.

When Wedley called for the vote to extend the contract, the board member did not only vote yes, but they voted a resounding ‘yes’ that could have been heard all over the school.

Dr. Epperson beamed with pride after the vote. She thanked the board but noted there is much work to be done.

•The board voted to forego the December 8 school board meeting due to it being a shorter school month with Christmas break. Historically, some December board meetings have been canceled unless there are important matters that are time sensitive and require immediate action from the board.

Thursday night, McNeal suggested canceling the meeting and said it would be Dr. Epperson’s call if something important came up, the board could have a called meeting. All were in favor.

While the topic of board meeting dates was discussed, Dr. Epperson said that January’s date would need to be moved. The set date of January 12, 2023 is the same night as parent/teacher conference. She suggested moving the meeting to January 19, which the board unanimously approved. Dr. Epperson told the board that if something urgent comes up, she would get with chair Wedley.

McNeal was not too keen on changing the time. He said it would be difficult for him to make the 5:30 p.m. meetings. He suggested moving the meeting time to 6 p.m., saying he is not against changing the time, but he wants it to be fair to the school and to himself.

It was noted that McNeal is also an alderman and the city board meets early and it has not been a problem for McNeal to get to those meetings on time.

Wedley reminded McNeal that the board only meets one day per month.

Board member Wayne McLemore was in favor of moving the start time to 5:30 p.m. He suggested the board give it a try and if it does not work out, they can revisit the time change.

The board unanimously voted to move the time to 5:30 p.m. for three months (January – March) and revisit the time at that time.

•The second reading of School Board Policy 6.2011. This policy addresses the school system’s pre-k program. The only change was to update the contact information for Dr. Tiffany Purnell, principal of Stigall Primary School.

•Dr. Epperson offered her monthly report to the board and audience. Her first topic dealt with attendance and discipline data. She presented a chart showing the number of absentees for October. Dr. Epperson said if a student has 10 or more absentees, that student will not advance to the next grade. Even if the days out are due to sickness and they have a doctor’s excuse, the day still counts as not in school.

Dr. Epperson said the schools are working very hard to get this under control. She asked Family Engagement Coordinator/Parent Liaison Greg Lenon and Pupil Services/Attendance Coordinator Alisha Baskerville to explain what is being done to keep students in the classroom.

Baskerville said they are focusing on attendance. One means is to challenge students to have perfect attendance for the month with rewards such as pizza or ice cream parties. Baskerville admitted it is hard to keep attendance up, especially with the triple threat from covid, the flu and RSV going around.

Lenon added that one of the biggest issues is parents will not call the school when their child is absent.

Baskerville said they are trying to work with parents on the attendance problem.

Dr. Epperson added that there is a difference between not feeling good and being sick. She said just because a student may not feel good is no excuse not to be in school. But, if the student is sick, please stay at home and do not spread it to other students and staff.

At the end of her report, Dr. Epperson said she and her administrative team are working on the school system’s 5-year strategic plan. She told the board there would be more information in the coming board meetings.