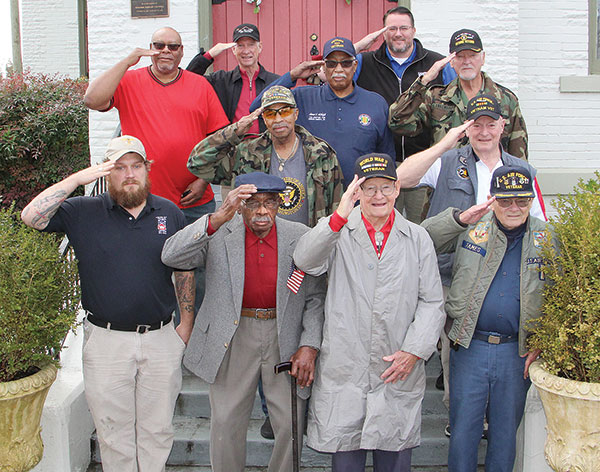 VETERANS DAY PROGRAM – These U.S. veterans were among those that participated in the annual Veterans Day program in Humboldt. This year’s program will be held on Friday, November 11 in downtown Humboldt.

On November 11, the United States will come together to celebrate Veterans Day in honor of the brave men and women who risk their lives defending this country’s people. It is a day to reflect on those we have lost to wars from past and present as well as bring recognition for veterans of the United States Armed Forces who are still with us today.

In Humboldt, the Exchange Club will be celebrating Veterans Day on November 11 by having a parade and a ceremony as well as multiple displays of military memorabilia and a helicopter display at the Barker Memorial stadium. The parade will be held at 10 a.m. on Main Street starting around the Humboldt Fire Department.

After the parade, the ceremony will commence at 10:30 a.m. inside of Magnolia Manor. During the ceremony, veterans will be honored including two World War II veterans. The National Anthem will be sung and a patriotic poem will be performed. Mayor Marvin Sikes will give the proclamation during the event and the Humboldt Jr./Sr. High School “Pride” Band will perform “Amazing Grace” followed by the program’s end to the playing of “Taps.”

After the ceremony, a helicopter display will be held at the football stadium at 11:15 a.m. to allow those in attendance enough time to travel to the school. The helicopter will be at the stadium until around 12:30 p.m. until the conclusion of the event. The Exchange club of Humboldt hopes to see the public during this honorable event on November 11.

According to the United States Organizations website, Veterans Day, also known as Armistice Day and Remembrance Day, is celebrated on November 11 every year to coincide with the start of the end of World War I. On the 11th hour of the 11th day of the 11th month of the year, an armistice, or truce, was proclaimed between Germany and the Allied nations. On November 11, 1918, this agreement to cease-fire was the first time in over four years that the battle raging on the Western Front silenced. The war ended less than a year later after the Treaty of Versailles was signed.

All across the country, families will be celebrating the heroes in their lineage that have served in wars like World War I and II as well as other war time places such as Vietnam, Korea, Iraq, Iran and Afghanistan. They gather with members of their family or friends still living to honor their commitment or the commitment from those that have lost their lives in the fight to make this country safe for all Americans. Some even gather on the federal holiday in front of the television to witness the national ceremony in Arlington, Va. at the Tomb of the Unknown Soldier.

Please send all photos to dwade@hchronicle.net; mail them to the Humboldt Chronicle at PO Box 448, Humboldt, TN 38343; or drop them off at 2606 East End Dr. Suite B.