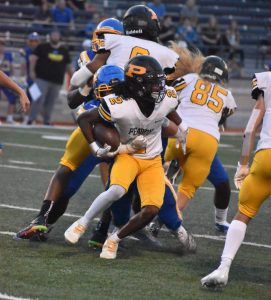 Peabody’s Kylen Wade (2) tries to get up the field after a catch against Westview during a Week 2 high school football game at Hardy Graham Stadium on Aug. 26, 2022.

Well, in Week 2, the Golden Tide went to the defending Class 2A state champions Westview and picked up a 26-13 victory.

Peabody opened the scoring on a two-yard touchdown run by London Burkett for the 6-0 lead, but following a Golden Tide turnover, Westview answered on a touchdown pass for the 7-6 lead after one quarter.

Sam Driggers made his first start of the season after a knee injury in a preseason scrimmage, and with 4:20 left in the half, he scored on a one-yard run for the 12-7 lead.

Peabody’s defense forces a three-and-out with less than a minute on the clock.

A 65-yard touchdown pass from Driggers to Derek Kee as the clock expired and extra point by Derek DeHaan put the Golden Tide up 19-7 at halftime.

Westview scored in the third quarter to cut Peabody’s lead to 19-13. But with 7:22 left to play, Billy Wilkins scored from two yards out to put Peabody up 26-13.

Kee intercepted a Westview pass with 1:41 to play in the end zone, which allowed Peabody to run out the clock.

Charles Rogers picked up his first win as the Gibson County coach as the Pioneers went on the road to hand Stewart County its second loss of the season.

This game wasn’t played last year due to COVID.

Gibson County (1-1) enters Region 7-2A play this week with Westview coming to town on Friday.

After giving up 46 points last week, the Humboldt defense made a statement in Week 2 with a shutout of Bruceton, giving the Tigers their second loss on the season.

Humboldt (1-1) opens Region 7-2A play this week with a road trop to West Carroll on Friday.

The Hornets came out and made a statement early with five touchdowns in the first half, allowing the second- and third-team players to play the entire second half.

The Hornets scored two play into the game with Austin Friend scoring his first of two touchdowns with 31 second off the clock.

South Gibson had 209 yards of offense in the first half with 205 coming on the ground.

Freshman Jaydon Reed scored the lone touchdown of the second half on a one-yard run as the clock ran the entire second half under mercy-rule.

Lambert had four rushes for 99 yards, Friend rushed four times for 66 yards and Jaydon Reed had 15 rushes for 58 yards.

South Gibson (2-0) opens Region 7-4A play at home on Friday as the Hornets host Milan.

This game was mercy-ruled at halftime, and Manassas decided not to play the second half.

After an early touchdown, Milan’s Hank Fisher blocked a Manassas punt that Mekhi Carr recovered in the end zone for the 13-0 lead.

Some of the other touchdowns in the first half included a passing touchdown from Andy Westbrooks to Trey Spinks, two touchdown runs by Carmelo Jones, a De’Quan Graves pick-6 and the final touchdown was a Jaydon Peete touchdown run.

Milan (2-0) travels to South Gibson on Friday to open Region 7-4A play.

For the second straight season, the War Eagles are off to a 2-0 start after picking up a road win over Gleason.

West Carroll scored the lone touchdown of the first quarter on an 18-yard touchdown pass from Jaxon Mims.

In the second quarter, Jay Long scored from three yards out for the 14-0 lead, but Gleason returned the ensuing kickoff 70 yards to cut the lead back to six points (14-8).

In the third quarter, JD Pigue scored with 6:26 remaining to put the War Eagles up 21-8.

And they stayed ahead by two possession until a Gleason touchdown with 3:42 left in the game cut West Carroll’s lead to 27-24.

But Jayden Milton put the game away with a 42-yard touchdown run to secure the win for West Carroll.

West Carroll (2-0) will try and get win No. 3 of the season on Friday as it hosts Humboldt in a Region 7-1A contest.