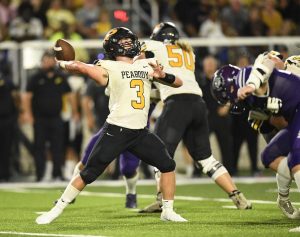 I admit it. Milan proved me wrong on Thursday. The Bulldogs showed grit and fight for four quarters to end a five-game losing streak to Peabody.

But that is what the football season is all about. If we could pick every game correctly, wouldn’t that be a boring season?

After Week 1, Michael Odom took a two-game lead by picking Munford over Covington and McKenzie over Huntingdon. He went 12-3 (.800 winning percentage), while Parkins went 10-5 (.667).

So here is what is happening in Week 2 in Gibson County and across West Tennessee:

Peabody made it to the Class 1A semifinals, while Westview won the Class 2A title. One of the two will start the 2022 season 0-2. The hope is to have a healthy Sam Driggers ready to go for the Golden Tide

Stewart County was shutout in Week 1 action. Gibson County started well but lost traction after the first quarter. If the Pioneers can play four quarters, a win is possible.

The Vikings will look to bounce back from an opening loss by picking up a win on the road, and they are hoping for a healthy quarterback situation.

Last year, Manassas canceled on the day of the game. The Bulldogs are hoping to play this year and continue on the momentum gained last Thursday.

The Hornets got the early season jitters out in the first quarter, and they will look to put this team away early and be ready to open Region 7-4A play next week.

These two combined for 110 points scored in Week 1. I expect both defenses to play better in this one.

Covington at North Side

Huntingdon at South Side