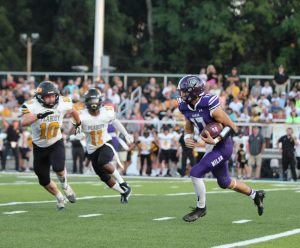 Milan’s Andy Westbrooks runs with the ball against Peabody during a Week 1 high school football game on Aug. 18, 2022.

For the first time in six years, Milan got the better of Peabody in the season opener.

The Bulldogs won 26-14 at Johnnie Hale Stadium on Thursday as first-year starting quarterback Andy Westbrooks ran for one touchdown and threw for two more touchdowns.

Peabody opened the scoring with 3:38 remaining in the first quarter as Jerry Donald scored on an eight-yard touchdown run.

Milan answered with 1:42 left until halftime as Brennan Hudson scored on a one-yard run that was set up by a 48-yard run by Mekhi Carr. Peabody led 7-6.

The Golden Tide was already playing without senior quarterback Sam Driggers, and with less then a minute to play in the first half, sophomore Jerry Donald went down with a broken collarbone and will miss six to eight weeks.

So Peabody played the second half with running back London Burkett at quarterback.

Milan took the 13-7 lead with 7:14 to play in the third quarter as Westbrooks hit junior Carson Pruitt with a 35-yard touchdown pass and with 10:49 remaining in the game, the du combined for a 3-yard touchdown pass. Milan led 20-7.

Westbrooks completed 8-of-19 passes for 108 yards and two touchdowns, and he ran the ball five times for 18 yards and a touchdown. Carr rushed the ball 23 times for 125 yards.

Burkett led Peabody with 130 rushing yards and one touchdown.

Milan (1-0) hosts Manassas in Week 2 action, while Peabody (0-1) will travel to Westview, the defending Class 2A state champions, with both games scheduled for Friday.

Midway through the second quarter, South Gibson trailed by three points as Lexington’s offense was moving the ball consistently.

But the Hornets responded with 31 unanswered points to turn the game around and open the season with a road win in Ben Johnson’s first game in charge.

South Gibson running back Trent Austin was carried off the field in the first quarter with an air cast around the ankle of his left leg.

In the third quarter, Bryce Hooten blocked a Lexington punt and Reed recovered the fumble for the 28-10 lead.

In the fourth quarter, Logan Miller hit a 26-yard field goal and Austin Friend ran for a three-yard touchdown before Lexington scored with 1:10 to play.

Sophomore Jayden Milton rushed for 253 yards and three touchdowns to lead the War Eagles, which scored 50 points on eight touchdowns to knock off Bruceton.

Milton had touchdown runs of 54 and 10 yards in the third quarter, but the War Eagles couldn’t pull away as they led 24-20 going into the final quarter.

But the fourth quarter was all West Carroll. Jay Long had touchdown runs of 16 and two yards, Cornelius Cannon recovered a fumble for a touchdown and Zach Hames scored a touchdown.

Long finished with 66 rushing yards and two touchdowns, and he had seven total tackles with one tackle for loss.

Mims had three passes for 54 yards and one touchdown.

The Pioneers gave up four first-quarter touchdowns to end Charles Rogers’ first game in charge of the program in a loss.

Obion County scored four touchdowns in the first quarter and another in the second quarter as the Rebels jumped out to a 35-13 lead at halftime.

Gibson County only scored one touchdown in the final three quarters.

For the second straight season, Franklin Grace got the better of Humboldt in the season opener.

Injury to quarterback Jaquri McCurry and a leg cramp to Casey Curry forced the Vikings to play a third-string quarterback Kei’Tavious Justice late in the second quarter. Curry returned to start the second half.

Grace scored in the third quarter for the 39-0 lead. Humboldt did score in the fourth quarter as Jeremiah Jones scored on a long run