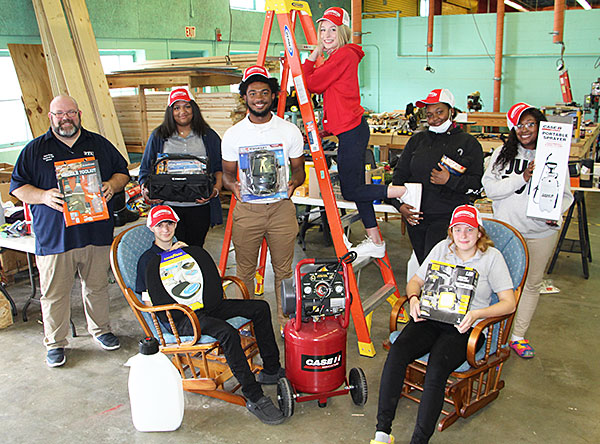 FFA BBQ & AUCTION – Humboldt FFA instructor Jason Wiles (left) and several FFA students are preparing for a fundraiser, Humboldt FFA BBQ & Auction. The event is slated for Saturday, August 27 at Bailey Park. The silent auction begins at 9 a.m., live auction at 10 a.m. and barbecue goes on sale at 11 a.m. There will be around 150 auction items including around 80 lots with multiple items ranging from two to 40 or more pieces.

Two things people love are bargains and helping out others. On Saturday, August 27, you will have an opportunity to do both by supporting the annual Humboldt FFA Alumni BBQ and Auction.

Humboldt Future Farmers of American (FFA) instructor Jason Wiles and his students have spent the past few weeks collecting auction items to go on the auction block. Some of the items will be sold during the live auction while others will be featured in the silent auction.

Gary Williams will once again be the auctioneer. Wiles said there was an issue last year with the PA system being used. He assured everyone that there will be a better PA this year and people will be able to hear much better.

Bailey Park will start hopping at 9 a.m. when the silent auction opens. The live auction begins at 10 a.m., while the barbecue goes on sale at 11 a.m.

Wiles said there will be somewhere in the neighborhood of 150 auction items, and of those, about 80 will be in lots with multiple items per lot. Some may have two items in a lot while others may have upwards of 40.

A few of the items to be auctioned off this year include an 8-ft. Werner ladder, two tickets to the UT Vols vs Ball State football game in Knoxville, a Case gas powered air compressor, lawn decorations, a wide variety of tools, Christmas decorations, grill tool kits, welder helmet, toy tractors, knives, knives and more knives, and so much more.

One big ticket item submitted to the auction for the past several years is a shrimp boil for 25 people. Jason Luckey and Zac Luckey will come to the winning bidder’s location to cook a Cajun shrimp boil feast onsite.

After both auctions are finished, the famous Luckey barbecue will go on sale. Barbecue plates include a sandwich, chips and a drink for only $9. Barbecue will also be sold by the pound for $10. Wiles encourages those who want to eat in or take out to get there early before they sell out.

The annual FFA Alumni BBQ and Auction is one of the organization’s biggest fundraisers every year. All money raised goes directly into the Humboldt FFA program. Money raised will help fund students participating in competitions, attend leadership conferences and go toward scholarships.

This auction fundraiser is a win-win for both the students and those purchasing items. Items purchased are often sold at a bargain price so the winning bidders get a great deal. These funds go directly back into the community to help out Humboldt students.

For more information about the Humboldt FFA Auction and BBQ or to donate auction items, contact Jason Wiles at wilesjw01@gmail.com.