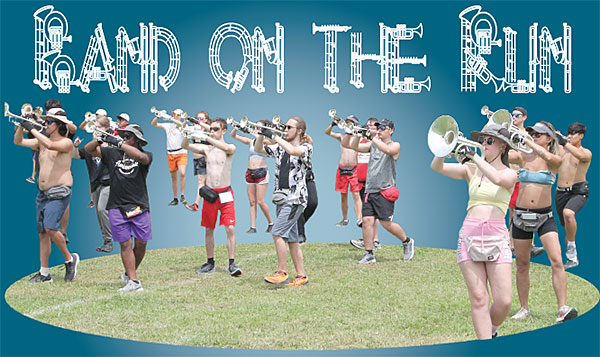 PRACTICE MAKES PERFECT – Members of the Music City Drum and Bugle Corps practice marching in counts and playing their instruments for the new tour show “Gasoline Rainbows” under the direction of their drum major, Katie Buck.

Imagine for a moment being trapped under the sinking mass of your own demolished ship; floating in the harbor surrounded by the sound of hammers dinging across various desecrated metal fragments while you call for help endlessly as the waves lap oil from the wreckage around your comrades with the light refracting rainbows upon the surface of the spill. There is beauty in the ruin as surely as there is pain; an ebb and flow of life, a give and take, a yin and yang.

This idea of a soldier reminiscing about his time in the military when he experienced a clash of wonderment inside of destruction is where Shane Gwaltney, program coordinator for the Music City Drum and Bugle Corps, found inspiration for their 2022 seasonal tour show entitled “Gasoline Rainbows.”

For the past two weeks, the Music City Corps has worked tirelessly on their show design in a summer camp at Humboldt Jr./Sr. High School. With around 150 members ranging in ages from 15-21, the band is calling the Thomas Ray Boykin Gymnasium home while they bring this show to life.

HORNS AT THE READY – Music City Drum and Bugle Corps members raise their brass instruments in preparation to practice their marching for a section of the show. The 150-strong band has been camping inside the high school gym for the past two weeks.

The Music City Drum Corps was formed around 14 years ago. The non-profit organization is based out of Nashville, Tenn. Hopeful, potential members audition in the fall for a coveted spot on the team where they will meet usually once a month from December through April and during Memorial Day weekend in May, the entire corps will “move in” and begin the task of learning not only music but how to operate as and become a family over the course of 77 days.

“Being a part of this organization, it’s so many different people coming together to do one thing,” JacyRae Cagle, a rookie conductor in the corps, described of the teamwork and family she has found in being a member. “You just learn so much about so many walks of life that you would not know if you did not do this organization.”

The Music City Drum Corps consists of percussion and brass instrumentation with musicians playing various instruments such as drums or mellophones, among others, as well as a full color guard. Some of these members are approached via recruitment measures before the fall auditions while others find their own way into the organization.

“I was a part of another organization and had the intention of shopping around for different (band) corps. I made a point that every show I was at that had a world class drum corps, I was going to be watching them and they (Music City Drum Corps) were literally the first ones I saw,” Nick Cirrell, euphonium player, expressed about his journey of becoming a member. “The energy that the performers were giving out on the field, I looked at it and knew they were a family and that it was a community. I saw that and that was it. I [knew] I was going there.”

A few of the members of the Music City Drum and Bugle Corps are aging out of the organization this year so “Gasoline Rainbows” will mark the end of their season with the group, including drum major, Katie Buck, who has been with the organization since 2019.

“I have been crying every day thinking about it.” Buck gushed about the close of her time marching. Buck was adamant that she would be taking the skills in time management that being a member of the corps taught her upon her departure and discussed a few of her goals after the tour, which included moving to be with her boyfriend whom she met while he was also a member of the corps. They got to march one full year together before he aged out of the group last year.

A FEW POINTERS – Musicians in the Music City Drum Corps receive a few pointers on the marching drill and playing from their section on the practice field between Viking Park and Humboldt Jr./Sr. High School.

With their new show debut, Music City Drum and Bugle Corps Director Joe Roach said the idea of  “Gasoline Rainbows” is to have the audience feel as though they are looking down on the memory of a shipwreck. There will be rusted ship pieces sticking out of the ground and everything from the costuming to the music notes will aid in telling this story. The band members will either be a part of the ship and the crew or the gasoline rainbow itself made from the oil spill.

“Our goal is to create a 12-minute blockbuster on the field this year,” explained Roach about the intent for the program the corps has been creating during their spring training.

The corps will be putting on a free show for Humboldtians to attend on Saturday, June 18 at 7 p.m. at the football stadium. This will be an informal performance without the use of their props and full costuming, but it will be a chance for the community that has housed the group to enjoy the first look at the tour before they head back to their home base of Nashville, Tenn.

The Music City Drum and Bugle Corps will end its 2022 tour in Indianapolis, Ind. for Drum Corps International World Championships.