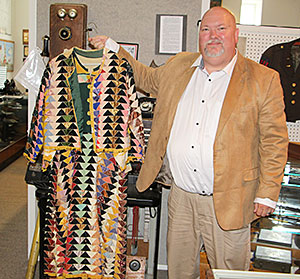 DRESS OF MANY COLORS – Tony Kail is the new curator of the Humboldt History Museum in downtown Humboldt. Kail holds an extremely colorful dress that peaked his interest due to the design, which he believes has aspects of early African American and/or Native American culture. Kail’s first day on the job was May 16.

The Humboldt History Museum has a new curator. The museum board of directors selected Tony Kail to oversee the downtown museum.

Kail is an anthropologist and history buff, which makes him a perfect candidate to operate the Humboldt History Museum. He said there is a plethora of Humboldt history packed into the somewhat small location inside the former city hall building on Main St., along with the Humboldt Chamber of Commerce and West TN Regional Art Center.

“I’m enjoying my job,” Kail said after being on the job for a week. “It’s amazing of all the stories in here. It’s a reminder of how important these stories are. There’s an old proverb, ‘When someone elderly dies, so does a library’ and this rings true. Preserving those stories is important.”

Kail’s first day on the job was Monday, May 16. The first week, Kail spent most of his time going through numerous historical artifacts, many of which are not on display.

“Becoming familiar with all the artifacts and documentation here, I’m very impressed with the preservation of artifacts donated by families,” Kail said. “I was looking through a box of letters from all around the world, getting a picture of their travels through history. There were programs (donated) where they attended events.”

The military collection on display at the Humboldt History Museum is something that impressed Kail. He said he’s seen lesser collections at larger museums.

One item in particular that sparked his interest was a multicolored quilted dress. Kail does not know its origin nor who donated the dress. He said it looks to have aspects from early African-American designs used in different clothing. It also has Native American aesthetics. Part of the allure of the dress comes from Kail’s personal interest in African and African American folklore.

Kail is hitting the ground running, working on a new exhibit that will feature the history of West Tennessee barbecue.

“Right now, we’re transitioning from the Hoodoo exhibit we had a few months ago,” Kail noted. “Now, we’re creating a new exhibit that focuses on the culture and history of West Tennessee barbecue with a big portion on Humboldt barbecue history. Look at the importance of barbecue in West Tennessee history and the lineage of barbecue restaurants here in Humboldt.”

A few of the names of prominent barbecue families Kail threw out included the Donalds of Sam’s BBQ, the Pulliams (later the Armours) and K&M BBQ. Another of Kail’s favorites was Lavorn Jones, whose sauce was what helped make Pulliam’s BBQ a region favorite. Kail did a lot of research on barbecue cookers and restaurants. He even wrote a book, “Meat Fire Wood” that focuses on West Tennessee barbecue.

Kail said the Donald family has a long lineage that includes Memphis, that Kail considers the King of barbecue cities. He talked about the differences from region to region and how each has its own unique spin on barbecue—from Memphis, to Carolina, to Kansas City.

“There are folks from all over the country that come here for Sam’s BBQ,” Kail stated. “It’s part of the official Barbecue Trail and also listed on the Aficionado Barbecue Trail.”

Kail is passionate about history and barbecue is one of his favorite topics. The museum exhibit will feature information on the historic culture, information about various sauces used in the regions’ style of barbecue as well as the types of woods used to smoke the meat. There will be old menus, business cards and advertisements of restaurants in West Tennessee, along with old photos and uniforms.

With Kail still in the early stage of his new position as museum curator, he has not nailed down a specific date to host the reception for the West Tennessee Barbecue exhibit but expects it will be mid to late June. This exhibit will offer insight to an important part of West Tennessee and Humboldt culinary history. One thing is for sure; there will be mouths watering from the delicious barbecue smoke scent floating in the minds of those attending the reception.