An annual festival is back again this year and plans to be bigger and better than ever. The 6th annual 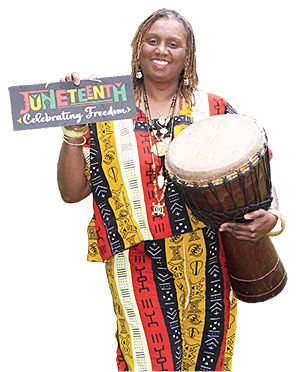 CELEBRATING JUNETEENTH – Valerie Porter, coordinator of Humboldt’s African American Heritage and Music Festival Juneteenth Celebration, invites everyone to come out to Viking Park in Humboldt, Tenn. on Saturday, June 18 and Sunday, June 19. The celebration includes live music, between 35-50 vendors, games and contest, and so much more.

African American Heritage and Music Festival, also known as Juneteenth Celebration, will be held on June 18-19 at Viking Park in Humboldt, Tenn. The event on Saturday runs from 11 a.m. until 8 p.m., then picks back up Sunday afternoon at 12:30 p.m. until 7:30 p.m.

Festival coordinator Pam Poston Porter made a big decision to move the event from 6th Street Park to Viking Park this year. Some of the deciding factors for moving are Viking Park being more handicap accessible and more parking areas.

“We had outgrown 6th Street,” Porter explained. “Viking Park has shade trees. The walking trail is better for the handicapped and strollers. Plus, it can accommodate more people.”

With an expected 35 to 50 vendors, the additional space will be needed. Porter said there will be a wide variety of booths this year. Some will be selling food, along with arts and crafts, healthcare, African heritage items and several others in various professions.

“The festival will feature headliners such as The Soul Shakers Society Band, The Just Friends Trio and the Hub City Gospel Choir,” said Porter. “Attendees will be able to watch the performances free on the shady grounds of Viking Park.”

There will be bleachers provided at the stage area, but Porter invites festival-goers to bring their lawn chairs and enjoy the entertainment under the trees.

Festivities begin at 11 a.m. that Saturday with opening ceremonies. There will be the blowing of shofar, an ancient musical horn typically made of a ram’s horn, used for religious purposes, like the modern bugle. Porter says this is a way to thank their ancestors. There will also be prayer, poetry and live music during opening ceremonies as well as a proclamation of Juneteenth’s historic importance.

At 1 p.m., Hub City Gospel Choir out of Jackson, Tenn. will take the stage for gospel hour.

Other events throughout the afternoon will include a hula-hoop and jump rope contest with prizes, spades and dominoes challenge, an African fashion show, a barbecue cookoff, sweet potato pie contest and music by Undercover DJs.

The first day wraps up at 7 p.m. with the Soul Shakers Society Band, also from Jackson. Porter described their music as a wide variety of genres from R&B, to rock, to jazz—old-school with a little bit of everything.

Sunday kicks off with day-2 of the celebration, which happens to be Father’s Day. There will be more music and more time to visit the vendors. There will be a Cornhole tournament and another fashion show with Humboldt’s own Regina Hunt.

Sunday culminates at 6 p.m. with a concert featuring The Just Friends Trio.

“The festival is for everyone to celebrate together—not separate but all-inclusive,” Porter added. “Bring the family. It’s an opportunity to learn from each other.”

Juneteenth, officially Juneteenth National Independence Day and also known as Jubilee Day, Emancipation Day, Freedom Day, and Black Independence Day, is a federal holiday in the United States commemorating the emancipation of enslaved African-Americans. It is also often observed for celebrating African-American culture. Originating in Galveston, Tex., it has been celebrated annually on June 19 in various parts of the United States since 1865. The day was recognized as a federal holiday on June 17, 2021, when President Joe Biden signed the Juneteenth National Independence Day Act into law, according to Wikipedia.

“We want it to be here,” Porter said of celebrating in her hometown, Humboldt. “We are committed to Humboldt.”

Porter also noted there will be other Juneteenth celebrations that Saturday in Milan, Trenton and Jackson but Humboldt’s will be the only one she knows of that spans Saturday and Sunday.

Vendor applications and sponsorships are still being accepted. For more information, contact Valerie Porter at 901-486-0373. The 2022 festival is sponsored by The Stigall Center, a non-profit 501(c)3 organization.