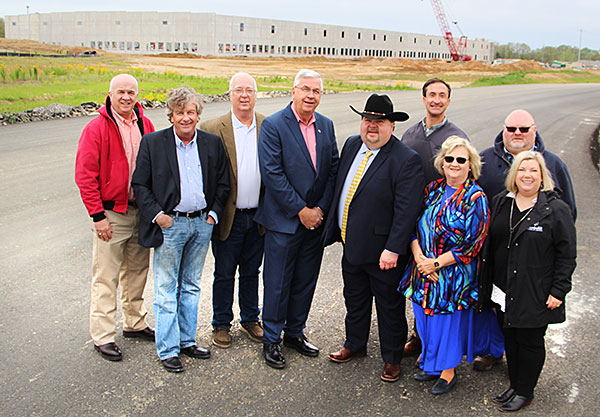 The massive building going up in the Gibson County Industrial Park will soon be delivering jobs to the area. Construction of the new FedEx distribution center is well underway.

The 330,000 sq.ft. distribution center is 10-times the size of their current location in the Humboldt Industrial Park, which they have outgrown. The new site encompasses 60 acres inside the Gibson County Industrial Park.

“FedEx announced plans to open a new distribution center on February 7, 2022,” Brock said. “They were on-site the very next day.”

With less than three months of construction in progress, the immense structure is going up quickly. Brock said construction should be finished by August and estimates the center to be operational by late fall.

FedEx is being tight-lipped as to the number of employees they will need to operate. Brock and Love estimate somewhere between 125 and 150 workers inside the distribution center. There will be a substantial number of driver positions to be filled as well.

Even though dirt was flying the day after the announcement, there were months of courting and planning to make the FedEx project come to fruition.

“In July 2020, we got a call from Fischer, a real estate broker corporation,” Love recalled of the first contact for FedEx coming to the Gibson County Industrial Park. “Anthony Calabria said he was working with a firm needing warehouse space and was interested in the 100-acre south site of the (Gibson County) industrial park.”

“We sent them all the files they requested,” Brock added. “We told them Tyson was coming in, needing 1,500 workers.”

Love said this was to make sure the buyer was not looking at old data from Google Maps and believing the entire industrial park was available. They wanted to be upfront and let the potential new tenant aware of Tyson’s plans. Love said they purchased 60 of the 100-plus acres.

The agreement was made with the stipulation of running utilities (electric, gas, water and sewer) to the site within 210 days. Humboldt Utilities General Manager Alex Smith said they could make that happen and they did.

A TDOT grant was used to construct the road from the cul-de-sac in the park all the way to the railroad track. Brock said they would apply for another grant to finish out the existing gravel road to cross over the tracks and continue all the way to McKnight Street.

With all the additional truck traffic coming in and out of the industrial park, a FedEx Ground consultant performed a traffic study. Three traffic lights (Central Ave. and Hwy 45 Bypass, Central and the entrance to Walmart, Central and the industrial park entrance) will be re-timed to limit the number of stops for truck traffic. Plans are to also extend the left turn lane on Central Ave. for traffic heading toward Jackson.

Even with FedEx taking over half the area of the southern portion of Gibson County Industrial Park, there are still around 50 acres remaining. That area, which sits behind two restaurants, a dialysis clinic and a new bank being built, will be used for retail and commercial development. Brock, Love and the rest of the recruiting team are feverishly recruiting potential hotels, grocery stores, professional services and other businesses for this piece of prime property. They have also been in discussion with a few developers that have shown interest as well.

Big things are happening for Humboldt and Gibson County. First it was Tyson. Now it is FedEx. Love and Brock believe this is only the beginning of wonderful things to come.