BOARD AT WORK – The Humboldt Board of Mayor and Aldermen met last week and tackled a short agenda. Even though the meeting did not take long, they did get quite a bit accomplished by hiring a new police officer, fireman and two public works employees.

The Humboldt City Board made quick, effective work of their relatively short agenda on Monday, April 11 with the focal point of the meeting surrounding the hiring of new employees for various departments around the city of Humboldt.

Humboldt Police Chief Reynard Buchanan brought his recommendation for the hiring of a new police officer before the city board. In his letter, Chief Buchanan described the new police candidate, Sara Grisham, as levelheaded and a hard worker, and that she would be a valuable asset to the department. 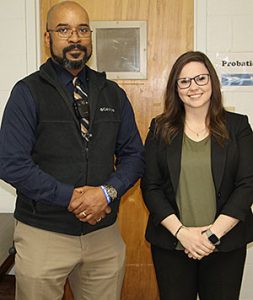 NEW POLICE OFFICER – The Humboldt Board of Mayor and Aldermen approved hiring Sara Grisham as a new police officer with the Humboldt Police Department. Humboldt Chief of Police Reynard Buchanan submitted a letter of recommendation to the city board.

Mayor Marvin Sikes asked the board if there was any discussion needed before he brought the recommendation up for vote. The board asked Grisham to talk about her history, both where she was from and the jobs she has held previously.

“I am originally from Trenton and moved to Humboldt within the last two years, and served in the Army (230th unit) for the last seven,” Grisham explained. “This will be the first police department [job]. I was an MP (military police) deployed for the last 14 months. I just got home about six months ago.”

Fire Chief Chester B. Owens brought another hiring recommendation before the board for a new fire fighter to be hired to the Humboldt Fire Department. Chief Owens mentioned that Jason Brown had the full qualifications for the job after having completed the agility and skills test as well as an oral interview and passing a background check. 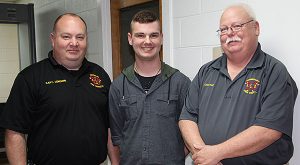 “I think you are joining a good organization,” Mayor Sikes told Brown after the board voted to approve him as a new hire.

Brown’s first day on the job was Monday, April 18. The mayor also spoke to the chief after reviewing the report and noted that the fire department had been busy with calls over the past month.

“We’ve had a pretty good month. We are averaging right around 30 a month. Not too bad.” Chief Owens assured Mayor Sikes.

Two new street department workers, Michael Goodrich and Dallas Hudspeth, met in front of the city board as well Monday night for the approval of their recommendation for hire. The street department has been understaffed so the hiring of these new employees will relieve some pressure from the department.

“We need you. It is really hard to find people that want to come to work,” Mayor Sikes spoke to the men after the vote to hire both of them was affirmed.

“Gentleman, welcome aboard. Thank you for wanting to work for the city of Humboldt.”

Kristy L. Porter submitted an application for a beer permit and it was put to vote by the city board before the end of the meeting.  In her application, she met all the requirements to be authorized with the permit including being further away from schools and churches than is sanctioned at 250ft.

Mayor Sikes was welcoming of Porter’s new business before the vote was unanimously passed and made sure everything was good and checked all the boxes with the police chief.

“She will go through training sometime this week, maybe 30 minutes or so on the rules and regulations,” Chief Buchanan guaranteed the city board.

Mayor Sikes and the board of alderman adjourned the meeting promptly upon the completion of the agenda.