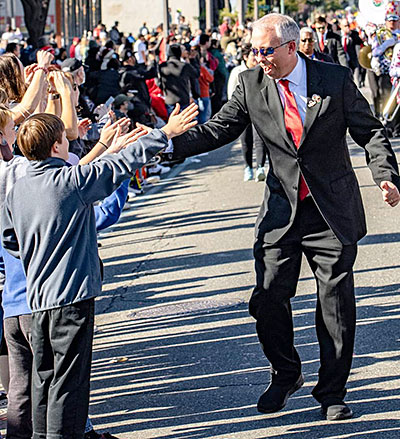 Each year during the Strawberry Festival, the festival president always puts his or her own stamp on the week-long celebration. This year is no different.

Strawberry Festival President Sherry Jo Smith is bringing back a position that has been inactive for over a decade—the honorary parade grand marshal. Smith proudly announces Jeremy Tate will be this year’s honorary grand marshal of the Grand Floats Parade.

“The idea came about after the (Gibson County) Mass Band had just performed at the Rose Bowl Parade,” Smith said of how she came up with the plan to bring back the honorary position and selecting Tate. “He’s a Humboldtian and went to school here. I thought he would want to give back.”

Tate had been Gibson County High Schools’ band director for the past several years. He spearheaded putting the Mass Band together in 2020 before covid hit. Tate sent an application to the Rose Bowl Parade Committee for the Mass Band to perform. He was so surprised when his email was returned and Gibson County’s Mass Band had sparked interest of being one of the 20 high school bands selected to participate in the Rose Bowl Parade. Then came the big news in 2020 that the Mass Band had been chosen to perform. But that year, the Strawberry Festival had to be canceled and eventually, so was the 2021 New Year’s Day parade.

But things got better and the Strawberry Festival was on for 2021. Rose Bowl Parade President Bob Miller came to Humboldt to see the Gibson County Mass Band perform in person.

With all the ups and downs over those two years, President Smith knew Tate had gone through a lot. She knew he was the perfect person to be honored.

“Never in a million years would I have thought this would happen,” Tate said of being recognized as honorary parade grand marshal. “I’m not one for all the fanfare.” 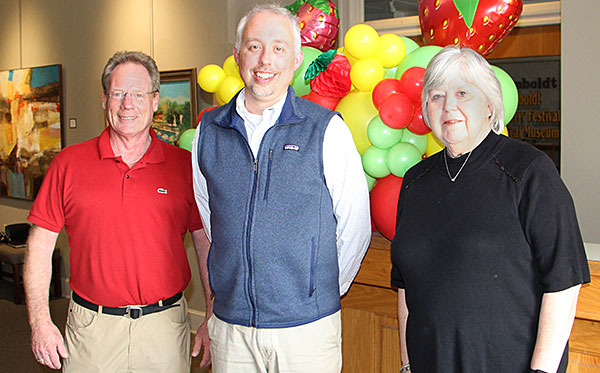 After Smith had made her decision, she contacted School Resource Officer Tosh and asked him to have Tate call her. Tate called Smith, thinking she was going to ask him if the Mass Band would perform at this year’s festival. But instead it was to ask if he would be willing to be the honorary grand marshal.

Tate asked Smith about the responsibilities of being grand marshal, to which Smith replied, “Nothing.” Tate, not liking to be in the spotlight, had reservations. That was until Smith said he and his wife, Erika, and kids would be recognized during the Presidents Reception and they would ride in the parade. Having his two daughters, Katherine and Cassidy, riding in the parade sweetened the strawberry pot, so he accepted.

“They already have their strawberry dresses,” Tate said with a smile for the excitement his daughters have for riding in the parade. “It’s all about the kids.”

But before Smith asked Tate to be honorary grand marshal, she ran the idea by the actual parade marshal, Michael Longmire. Longmire thought it was a great idea.

Tate attended the University of Memphis on a full band scholarship, thanks to Koeltz. Tate had ambitions of being a neurosurgeon. That was until he got a job in the trauma center at The Med in Memphis when all of a sudden he did not want to be a neurosurgeon anymore. Tate switched his major to biology with a minor in music, graduating in 2004.

Tate moved back home and got a job at Jackson-Madison County General Hospital. Then he found out Bethel University offered a 2-year music certification program. Bethel had just started up their band program. Tate was hired to be the assistant band director 2004-06.

As a side job, Tate would assist with high school band camps. While helping out at Gibson County High School, B.O. Booth offered him the band director’s job, which he accepted. He held the band director position up until this school year when he took the position of consulting advisory teacher. He also teaches college level biology.

He and Erika married in 2009, but they actually met in the band program at the University of Memphis. Tate laughed and said she wanted nothing to do with him at the time. Apparently that changed and the two have a wonderful family. They now make their home in Medina.

“With all of his hard work and everything he’s gone through with the Mass Band, he’s come back to the community in more ways than one,” Smith said of her honorary marshal Tate. “To take on the Rose Bowl Parade, he gave back to not only Humboldt but the whole county.”