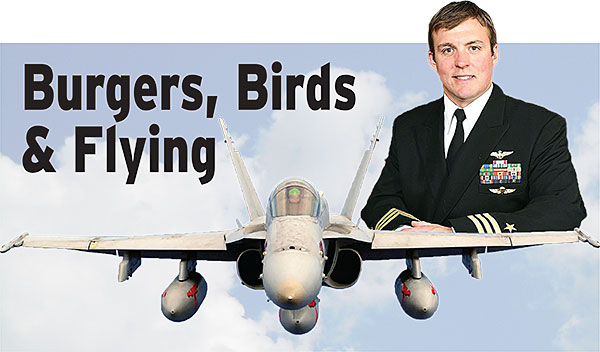 Humboldt is in for a treat on the Saturday before Strawberry Festival week. Commander Justin Allen will be the keynote speaker at the Boys & Girls Club Bird & Burger Dinner.

Bird & Burger is the club’s biggest fundraiser each year and you cannot get much bigger than having a U.S. Navy Top Gun pilot as the speaker. The event takes place Saturday, April 30 at the Boys & Girls Club.

“Since there will be a wide range of kids of all ages, I’ll work the spectrum that fits the entire audience,” Com. Allen said last week while discussing the dinner fundraiser.

Boys & Girls Club Board of Directors’ Patricia Taylor contacted Allen to see if he would be the keynote speaker for the Bird & Burger Dinner. He graciously accepted.

“I said sure—I’m happy to do it,” he recalled of the conversation. “I can educate the kids by understanding my opportunities. I think back, what got me on the path I’m on? I had teachers who knew I was interested in the military. They gave me information about the Navy and being a pilot.”

Com. Allen said his first interest in becoming a Navy pilot was in his junior high years, around the 7th grade. He said flying a military jet definitely sparked his interest. As he progressed in high school, he knew what he wanted to do with his life and that was to serve his country as a fighter pilot.

“The Bird & Burger Dinner is one of our oldest fundraisers,” said B&G Director Gladys Robinson.  “It brings together guests of all ages for an evening of fun for a good cause. The event draws civic leaders, community members, and club members and staff. This event allows our supporters to connect with our programming and learn about our efforts to build great futures for the next generation.”

Allen is a product of the Humboldt area. He is a 1996 Humboldt High School graduate and entered the U.S. Naval Academy in 2000. In 2003, Allen earned his “wings” as a Naval aviator.

Allen was first deployed after earning his wings during Operation Iraqi Freedom on the USS Harry Truman. After his deployment, Allen attended U.S. Navy Fighter Weapons School, also known as Top Gun. He held the position as a strike fighter tactics instructor.

The next chapter in his military career was aboard the USS George Bush in support of efforts in the 5th Fleet Area of Responsibility.

“Justin brings a unique perspective and message to the young people, their families and to each of us,” said board of directors member Gil Fletcher. “His message—set your goals high and determine to work hard toward those goals. And it seems that Justin, in his humility, is not seeking recognition or praise for what he has accomplished but seeks to serve others. And this is surely an example of determination, sacrifice (imagine the hours of training and preparation he has invested) and staying the course on the path God laid out for him. And still, he has not stopped—he is remaining true to that calling and now, as Commander Allen, leads others to be successful and determined to serve.”

Now, after an illustrious military career, Allen and his wife, Tracy, reside in Medina, Tenn. They have two boys. Gage is 11 years old and Porter is nine. Allen is the son of the late Sidney Allen and Betty Allen Langley.

Tickets and tables for the annual Boys & Girls Club Bird and Burger Dinner are selling quickly, but there are still a few available. Call the club at 731-562-0067 to make sure you have a seat for a wonderful program while helping out the Boys & Girls Club as they help mold the leaders of tomorrow.