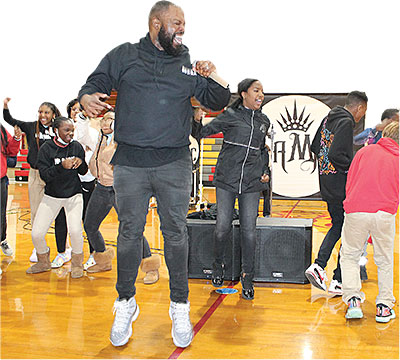 Humboldt Jr./Sr. High School welcomed Michael Lacoste, aka DaMac, to present his message of love, hope and kindness to 7th and 8th grade students at the school. DaMac performed and spoke to students and the staff in the school gymnasium. He presented his encouraging message through words and music.

Lacoste began his ministry in 2007 while attending the University of Missouri – Columbia. Through his faith, he has developed a ministry and passion for youth and uses his talents to magnify his faith and influence youth. He uses his ministry to break boundaries by blending different genres of music, which brought about the name DaMac (Deeply Anointed Music About Christ).

DaMac has released three albums, selling over 5,000 copies. In 2011, he was the New Band Showcase Winner at the Cornerstone Christian Music Festival. In 2011 and 2012, he was a part of The Extreme Tour, a national Christian music tour.

DaMac has shared the stage with some of the biggest names in Christian music today, such as David Crowder, Building 429, FF5, Tenth Avenue North, Trip Lee, Derek Minor, We Are Messengers, Plumb, Gungor, Propaganda and Lecrae.