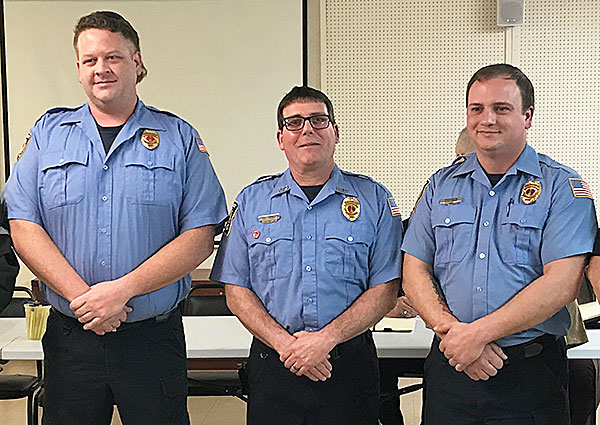 FIRE FIGHTER PROMOTIONS – Three Humboldt fire fighters were promoted last week when the Humboldt Board of Mayor and Aldermen unanimously approved the promotions. Humboldt Fire Chief Chester Owens and Assistant Chief Lee Kail recommended the board promote (from left) Jonathan Tibbs, John Belanger and Alex Trudo to the rank of lieutenant with the Humboldt Fire Department.

Three Humboldt firefighters received accolades last week when they were promoted to the rank of lieutenant. Alex Trudo, Jonathan Tibbs and John Belanger were promoted during the Humboldt Board of Mayor and Aldermen meeting on Monday, March 14.

Humboldt Fire Chief Chester Owens and Assistant Chief Leroy Kail submitted a letter of recommendation to promote the three men who have served the Humboldt Fire Department well over the past several years.

In the letter, Chief Owens stated the fire department had lost two lieutenants in the past few months and another will be retiring in the near future. Owens explained the chain of command within HFD with the chief, assistant chief, captain/fire inspector and three lieutenants. The lieutenants are the leaders of their respective shifts and take care of the day-to-day operations. Lieutenants are the first level of command and will act as commanders of emergency scenes, conduct training on their shifts and assist training department wide.

Chief Owens asked the three fire fighters to come forward. He told the board that these three men have been put to the test and working in leadership roles. Leadership on the scene of an accident or a fire can be stressful, making a decision that can be life or death, the chief said. Owens said he highly recommends the three men for the promotions.

The chief introduced each of the three men. He first introduced Trudo who has been with HFD for 11 years. Tibbs also has 11 years on the fire department. Belanger came to HFD after working as an officer with another fire department and has now been in Humboldt for three years.

Chief Owens said all three are up for the task and have been filling in as lead fire fighters after the other lieutenants left the department. Owens also noted the state requires the positions in the chain of command be filled.

Mayor Sikes said he knows all three of these men well. He asked them as a group if they were up to the task of the leadership positions. All three said they are ready.

The board unanimously approved the promotions.

Mayor Sikes said the city applied for this grant last fiscal year to purchase a fire truck but the application was turned down. Now the city is applying again.

The city is requesting $400,000 and up to $20,000 additional funds (5-percent) allotted for ThreeStar Communities. CDBG program requires a matching 10-percent from the city.

Sikes said Chief Owens and Assistant Chief Kail met with representatives with the grant program to identify what type of fire truck would be purchased using grant funds. The mayor said the process is moving very fast.

He noted the remainder of the cost to purchase the fire truck would be budgeted.

Board member Leon McNeal was in favor of applying for the grant. He noted the city had been working on getting the Humboldt Fire Department another truck that is badly needed.

Mayor Sikes agreed and said getting a new fire truck is long overdue.

The board unanimously approved the resolution to apply for the CDBG program.

•The city has been without a code enforcement officer for several months after Jeanna Shellenberger Harris retired. Monday night the board voted to hire Anita Dunn for the position.

Mayor Sikes presented a letter of recommendation from City Building Inspector Mike Uselton to hire Dunn. The letter stated Dunn has years of property management experience, has excellent communication skills, work ethics and shows great attention to details. Uselton added that Dunn is well organized and is willing to work on any project assigned to her.

McNeal spoke highly of Harris’ work for the city and noted she had a lot of pressure put on her as code enforcer. McNeal wanted to know when Dunn could begin working for the city.

Dunn said she would be ready tomorrow morning (Tuesday, March 15).

Sikes said her first task would be cleaning up the city and acknowledged it needs cleaning up very badly. He said citizens could tell there had not been a code enforcer in Humboldt the past six months. The mayor said she would be working closely with Uselton and Public Works Director Willie Reed.

Mayor Sikes said the city is very fortunate to find somebody with her qualifications.