FACING THE CROWD – When the Humboldt Board of Mayor and Aldermen met last week, the set up was different from years past. Instead of the board sitting around the table, they lined up three tables that faced the audience, which everyone attending the meeting liked.

When the Humboldt Board of Mayor and Aldermen met for their February 28 meeting, a concerned citizen had requested to address the board. Humboldt resident Sammy Sampson’s request was on the agenda.

Mayor Marvin Sikes told the board that Sampson had requested to speak during the meeting.

Sampson, who lives on Greenview Cove, said he has paid city property taxes for 20 years, and does not think he and others in the neighborhood are getting their money’s worth for services. His main complaint was the condition of his street, which needs repaving.

Sampson asked if there was still a line item for paving. He wanted to know what the criteria are for deciding which streets to pave.

Sampson said his street is only one-tenth of a mile. He also noted that Brady Nelson Rd. is in bad condition as well, due to pine tree root tearing up the pavement. Sampson said driving on Brady Nelson would tear up your vehicle.

Alderman Leon McNeal did not like the fact that Sampson was allowed to address the board. McNeal said the people should bring their concerns to the aldermen, then the aldermen would bring it to the mayor.

Alderman Shane Lynch, who represents the ward in which Sampson lives, disagreed with McNeal’s line of thinking. Lynch said the city’s charter states that citizens are allowed to request to speak to the board.

Mayor Sikes thanked Sampson for bringing his concerns to the board. Sikes said he drives the streets of Humboldt and told Sampson, the board and the audience that he and the city needs to do a better job.

The very next agenda item for the board meeting was to approve paving bids. Only one company submitted a bid, Martin Paving out of Medina. Mayor Sikes said he thought two other businesses would submit bids but both said they have more work scheduled. Martin’s bid came in at $232,375.

As discussion began, Alderwoman Tammie Porter said she agreed with Sampson’s suggestion of having a committee with a representative from each ward to come up with a list of streets to be repaved.

There was discussion of which streets were included in the bid specs. Mayor Sikes told the board that the paving was approved in the budget last June and for smaller streets.

Sikes said that Fitzgerald Dr. has been on the list of streets needing repaving. A portion of Fitzgerald is on the bid for resurfacing but not the entire street. The mayor said it would cost around $200,000 to pave the entire street. He wants to divide Fitzgerald into three phases. Sikes then estimated it would cost $15 to $20-million to do all the paving in Humboldt and there is only so much money that can be used for paving each year.

Porter questioned why Esquire Peek was one of the streets being repaved in this bid package. She said it was not in bad shape.

Mayor Sikes said it is better now that all the potholes have been repaired but the street is crumbling and in bad condition.

Alderman Monte Johnson asked if the money could be equaled out in each district, noting Esquire Peek was listed at $100,000 and Fitzgerald was only getting $8,000.

Mayor Sikes said there could be more stimulus money coming in that could be used for paving. He also asked the board to come up with lists of streets in their districts.

When the vote was held, only a few aldermen were heard voting so Mayor Sikes called for a role call vote. Porter voted against accepting the bid while McNeal, Johnson, Lynch and Julie Jones-Coleman voted to accept the bid.

In other board actions:

•The board unanimously accepted the resignation of police officer Kyle Knapp. Knapp was approved for hire during the city board’s December 13, 2021 meeting.

In a letter to the board from Humboldt Police Chief Reynard Buchanan, he stated that Knapp left Basic Police School on his second day and submitted his resignation on January 10, 2022, less than a month on the police force.

The board approved Knapp’s resignation. McNeal stated that some people are not cut out to be a police officer, and the board agreed.

•Next, Chief Buchanan submitted a letter of recommendation to hire Hunter Keathley as a new police officer.

In the letter, Chief Buchanan noted Keathley had passed the National Police Officer Selection test, physical agility test, medical exam, drug screen, psychological evaluation and meets all the requirements of the state. Keathley will now have to attend Basic Police School. It was also noted that Keathley is currently employed as a corrections officer for the Gibson County Sheriff’s Office.

The board unanimously hired Keathley. 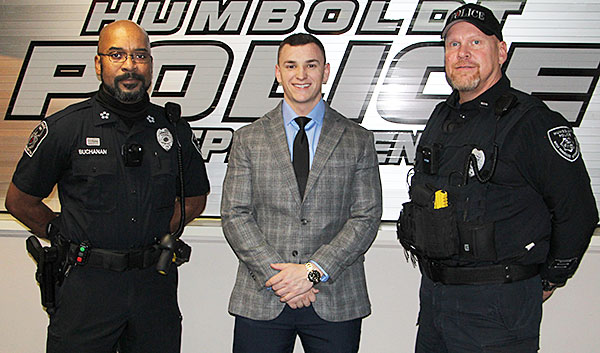 NEW POLICEMAN – Hunter Keathley (center) is the newest officer of the Humboldt Police Department after he was unanimously approved for hire during the Humboldt City Board meeting on Monday, February 28. Humboldt Police Chief Reynard Buchanan (left) recommended Keathley for the vacant position on the police force. Lt. Heath Smith (right) welcomes Keathley to the force.

The board unanimously approved both Lynch and Warrington to their respective boards.