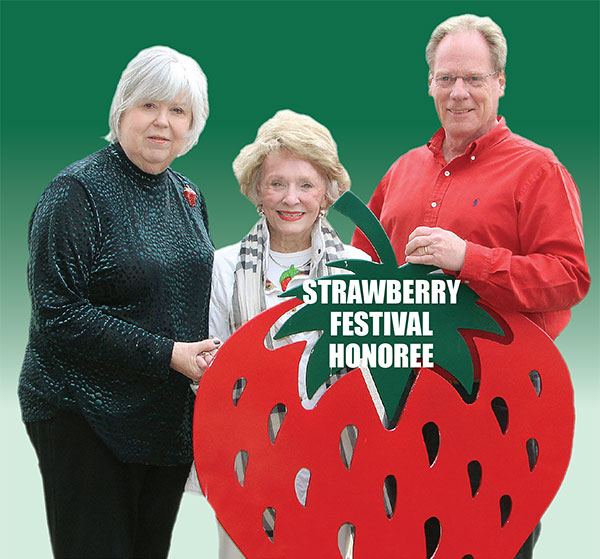 FESTIVAL HONOREE – Strawberry Festival President Sherry Jo Smith (left) and General Chairman Shane Lynch (right) proudly announce Marzette Stallings is the honoree of the 84th West Tennessee Strawberry Festival this year. This is Stallings second time being selected as honoree. In 2001, President Judy Graning selected Herman Ray Stallings and Marzette as honorees and were the first couple to serve with that title.

This is Stallings’ second go-around as festival honoree. In 2001, she and her husband, Herman Ray Stallings, were co-honorees. They have been a loving team for decades. Rarely do you see one without the other by their side.

“I was looking through the old (Strawberry Festival) magazines,” Smith recalled as she was putting together a list of potential honoree candidates. “I saw Ms. Marzette’s sweet face and I knew she was the one. She served on the Queen’s Luncheon Committee for 63 years. It just came to me—she’s part of the festival.”

“And the festival is part of me,” Stallings quickly responded.

Stallings took a walk down memory lane as to how she and Herman met, and ended up calling Humboldt their home, “I met Herman. You always hear, ‘tall, dark and handsome’. Well, he wasn’t tall and he wasn’t dark, but he sure was handsome!”

In the early 1950s, he took her to Humboldt to the Horse Show. She recalled it was after midnight before it was over. They had to drive back to Memphis that night. At the time, Stallings was a schoolteacher and had class the next day. Luckily it was a Friday, she chuckled. This was when she fell in love with the Strawberry Festival.

After Herman Ray brought his bride back to Humboldt in 1957, Stallings got involved with her newfound love—the Strawberry Festival. Her first year in Humboldt, she was asked to help with the Hostess Princess Revue. Stallings said they held a fundraiser that was very successful that year. Herman also got involved as chair of the Queens’ Transportation Committee.

“Back then, the hostess pageant was outside at the horse show arena,” Stallings recalled of one year that did not have a good outcome. “We had a backdrop design and had it built in squares. We got there about five in the morning. We knew where each square went. It was wonderful. We had worked on it for months. Then, we had a tornado warning that day. We put it up anyway. The wind was about to blow me over. When it was finished, it was gorgeous. At five o’clock (in the afternoon), they called it off and moved it to the gym. We worked so hard.”

Even though Stallings worked with the beauty pageants, perhaps their family and a group of friends were best know for the elaborate floats they built. For years the Stallings, Bob and Jane Atkins, and John and Carolyn Barnett, and others built floats for their children to ride on in the parades. Early on, Stallings said Union University and Lambuth College had the most beautiful floats. Stallings and her friends wanted to build big, extravagant floats like those.

Stallings said they would watch the Rose Bowl Parade and check out the floats to get ideas for their own floats. They dreamed big and big is what they came up with.

“We wanted them bigger every year,” Stallings said. “We built a clown float. It was the biggest thing I’ve ever seen. We had to raise the power lines (on the parade route) it was so tall.”

Another float featured a cat riding in a car; “King of the Road” was the float’s name. The cat had a moving tail but there was no motor, it was using manpower. Stallings said Charles Welch was actually inside the float, wagging the tail. This float was big and tall as well. It was so tall, they had to remove the cat’s crown just to get it out of the float barn.

Another big float the families built was the Jolly Green Giant. Stallings recalled her oldest son, Ray Stallings, was a small tyke at the time and did not want to get on the float. He cried and cried, she said. But with the help of a close family friend, he calmed down and all was good.

“When the kids grew up, we stopped building floats,” Stallings said. “But then we had grandkids and did floats again.”

In 1997, the grandchildren rode the “Grandberry Special”. It was a train with a locomotive that pulled other train cars. Since the float was narrower than the typical float, it was able to snake from side to side down the parade route.

“We did a patriotic float with a big canopy,” Stallings recalled of another memorable Strawberry Festival. “It rained Thursday and Friday. There were no parades. They had both on Saturday. Our float got drenched. Bill Smallwood also had a float (that got soaked). He was our competition. He went to Memphis for supplies (to rebuild their float). He called and asked what we need. I said, ‘everything’. Even though he was our competition, he was so nice and thought about us. We puffed that float all night.”

Through it all, working with the pageants has been her pride and joy since 1961. Stallings recalled one of her first actions on the committee was the need to feed the royalty girls. She said the girls are up at the crack of dawn, on the parade route all morning long and needed to have a good meal. That’s when the Queens’ Luncheon was born.

But one of her most special memories of the Strawberry Festival was 21 years ago when she and Herman Ray were the first couple to be honoree. That year, the Stallings and their grandchildren road on a float designed as a horse drawn carriage. Doralynn Lowe built the float for the Stallings that year.

After hearing Stallings reminiscing and taking a walk down memory lane, President Smith said, “You see why I picked her to be honoree. You can tell how much she loves the Strawberry Festival.”

Even when the news is about Stallings being honoree, she still wanted her story to be about family. After hearing Smith’s comments, Stallings had her own thoughts about the honoree title.

“If I picked the honoree, I’d pick Herman’s daddy (H.R. Stallings),” she noted. “You think I love the festival? His daddy loved it more. He wouldn’t be anywhere else but on Main Street.”

“The Strawberry Festival is always big and keeps getting better,” Stallings said. “It takes love and devotion to continue on, year after year. I love it.”