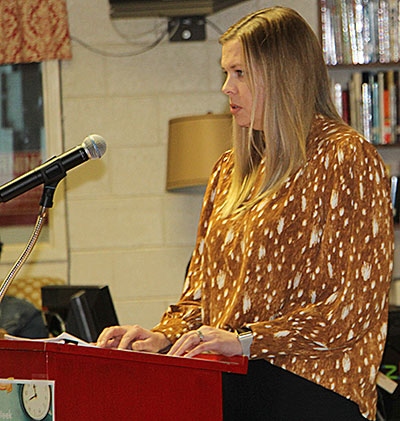 Humboldt School Board members were back at the table after a 2-month break. The board’s last meeting was in November of 2021. The board canceled the December meeting due to being a short month with the Christmas break. Then, inclement weather forced the January 2022 meeting to be canceled as well.

With Thursday evening’s meeting underway, the first task at hand was to elect a board chairman, vice chairman and TLN (Tennessee Legislative Network) representative.

Board member Wayne McLemore nominated Mark Hodge to be chairman. Board member Terry Johnson nominated Valeria Wedley, who served as chairman last year. When the vote was taken for Hodge, only McLemore voted. For Wedley’s vote, Johnson voted for her and Wedley voted for herself. That was only two votes. Three votes would be needed to have a majority of the votes. After a standstill with no clear winner, board member Leon McNeal said he voted for Wedley giving her the needed vote to remain chairman.

The final piece of the election was the TLN representative. McLemore nominated McNeal and Johnson nominated Hodge. Once again, it was a tie vote of 2-2 with McNeal voting for himself along with McLemore, and Johnson and Wedley voting for Hodge. For a third time, Hodge said his conviction would not allow him to vote for himself. With the standoff once again, McNeal changed his vote to Hodge, making Hodge the TLN position.

With the elections out of the way, the first item of business was the school system’s audit report for fiscal year 2020-21, which ran July 1, 2020 through June 30, 2021. This was a trying year for Humboldt City Schools dealing with covid and an interim superintendent (Lillian Shelton).
Marcie Williams with Alexander, Thompson, Arnold, CPA went over the report. The audit report is broken down into two separate reports—one for the schools and one for the school board central office.

Williams began with the school system’s audit report and had the board look at specific pages of importance. She pointed out key segments, one being the overall budget for the year of $13.7 million.

At the end of each report is a list of findings. These are evaluations of audit evidence, compared against audit criteria. Auditors recommend procedures to take to adhere to the criteria. The state has rigid criteria for school systems that are extreme. It is not uncommon for school systems to have multiple findings.

Williams said there were five findings for the school system, which is down from eight the year before. Two of the findings were in financial statements from internal control over financial reporting for material weakness and the other for significant deficiency. The third finding was budget noncompliance and significant deficiency. The next finding was for lack of timely reconciliations of cash and closing. The final finding was for material journal entries.

For the individual schools, Humboldt Jr./Sr. High School was the only one with findings. East Elementary and Stigall Primary School had no findings. Again, this is not uncommon for high schools to have findings since there are more opportunities for discrepancies.

The first finding at HJSHS was for three instances in which money was not receipted by someone or turned into the office the same date as the date of collections.

The second finding was for a shortage of $172 in a chocolate bar fundraiser.

The board thanked Williams for reporting to the board, and then approved the audit report.

Other school board action:

•The board approved the meeting dates for the 2022 calendar year. They are January 6, February 10, March 10, April 7, May 12, June 9, July 7, August 11, September 8, October 6, November 17 and December 8. The board typically does not meet in December but left the date on the calendar. They could vote to cancel the December meeting later in the year.

•Another topic that was discussed a few years ago was pay for the school board members.

Chairwoman Wedley opened discussion by saying this has been thrown around a lot. She noted the city board gets paid and said some board members may want to get paid as well.

Hodge, who pays for his health insurance through the school, said that was a Godsend for him and his family. He wondered if paying a portion of the insurance would be something to consider instead of receiving a paycheck.

Wedley seemed to like Hodge’s suggestion and threw out a hypothetical dollar amount of $100 to go toward a board member’s insurance. She said $100 per member would come out to $6,000 per year. It was noted any type of pay for the board would have to come out of the school’s general fund.

Wedley asked superintendent, Dr. Janice Epperson, if she had researched school board being paid.

No action was taken since the agenda item was only for discussion. Wedley suggested doing more research and add it to the agenda of another meeting.

•At the end of the board meeting during the superintendent’s report, Dr. Epperson asked representatives from each school to come forward. Since the board missed January’s scheduled meeting, they also missed School Board Appreciation Week. Principals, administrative staff and even a couple of students presented gifts to each board member. Stigall Primary was the first to hand out the presents. East Elementary was next followed by HJSHS. The last round of gifts was from the central office. When it was over, the board table looked like Christmas morning with all the gifts, card and posters.

It was a fun way to end the first meeting of the year.

SCHOOL BOARD APPRECIATION – Thursday evening toward the end of the Humboldt School Board meeting, representatives from each school and the central office presented board members with gifts, in recognition of National School Board Week.