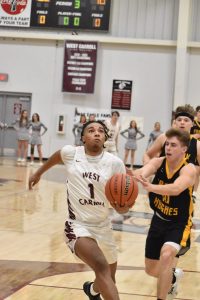 2 weeks. That is all that remains in the regular season before district tournaments will take over the high school sports landscape in West Tennessee.

That means teams are playing harder to try and move up the district standings. So there were lots of good games to pick from this week.

Check out the top games in Week 11:

Middleton (16-1, 5-0 14-A) at Humboldt (8-15, 3-3) Boys (7:15 p.m., Tuesday): If the Vikings want one of the top two seeds, this is a must win. But beating Middleton is no easy task. Humboldt will have to defend the Tigers’ multiple attacking options, while Kylan and Keaton Johnson will need big games on the offensive end.

Gibson County (9-10, 1-3 12-AA) at Milan (12-7, 3-2) Boys (7:15 p.m., Friday): The Bulldogs are coming off a District 12-AA win over top-seeded Westview on Friday. Milan was down 11 entering the fourth quarter and came back to win. Milan needs to finish off the season sweep of Gibson County to have a chance at the No. 2 seed. Gibson County really needs a win to climb out of the play-in game of the district tournament.

Humboldt (8-15, 3-3 14-A) at Peabody (14-6, 3-1) Boys (7:15 p.m., Friday): For the third time this season, these two Gibson County rivals will meet. Humboldt won the first meeting in the Martin Lions Club Christmas Tournament, but Peabody bounced back and won by 40 points in the first district meeting. Jason Hunt got his revenge on his former team, but now this is playing for a top seed going into the District 14-A tournament.