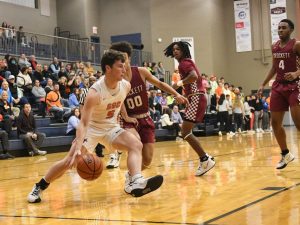 The middle of January is here, which means the district schedule is heating up. This week seems to feature many matchups between teams expected to play for district titles in February.

So get your popcorn ready for big matchups this week involving Gibson County area teams.

Check out the top games in Week 9:

South Gibson (16-3, 0-0 12-AAA) at South Side (13-2, 0-0) Girls (6 p.m., Tuesday): The District 12-AAA opener for both teams, and these two are the favorites to reach the district title game and make a run at the state tournament. Both teams rely on pressure defense to create offense, and both teams have played a tough schedule thus far to prepare for a postseason push. South Side just has a little more experience on its side.

Gibson County (9-7 1-0 12-AA) at Milan (7-7, 0-2) Boys (7:15 p.m., Tuesday): The Bulldogs are in a spot they don’t want to be after losing the first two District 12-AA contests. A win here though and Milan will be right back in the mix of the five-team district. Gibson County knocked off Huntingdon in its district opener. Both teams have big men that like to crash the boards, so expect that battle to determine the winner.

Westview (15-2, 1-0 12-AA) at Gibson County (19-1, 1-0) Girls (6 p.m., Friday): These were two of the top three teams in the Class AA girls basketball AP poll. There are plenty of stars that will be on the floor in this one as Gibson County has Madison Hart (2020 Class A Miss Basketball finalist) and Micah Hart and Westview has Jada Harrison (2020 Class AA Miss Basketball finalist) and McCall Sims.

North Side (11-2, 0-0 12-AAA) at South Gibson (13-6, 0-0) Boys (7:15 p.m., Friday): After playing No. 2-ranked South Side on Tuesday, the Hornets turnaround and play a tough North Side team. Keith Runyon played North Side multiple times last season as he was in the same district as the Indians at Lexington. South Gibson is coming off its biggest win of the season Friday when it beat Dyersburg.

Peabody (12-5, 1-0 14-A) at Middleton (12-1, 2-0) Boys (7:15 p.m., Friday): This is another matchup this week between two favorites to win the district. Middleton has been tough all season with the lone loss coming against MHEA. Playing in Hardeman County is tough, so Peabody would have to play its best game to have a shot on the road.