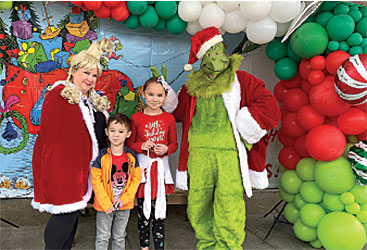 There was a party going on in Humboldt Thursday evening. Businesses across town hosted open houses. Shoppers packed into the store finding bargains galore.

Highlighting the night was the lighting of the Christmas tree in downtown Humboldt. Humboldt Mayor Marvin Sikes had the honor of flipping the switch, lighting the 30 ft. tall tree. He had a special assistant to help him out this year, his grandson Grayson Walker.

Once the tree was lit, people gathered around the tree to take pictures. There were some large ornaments to use as part of the backdrop and there was a large picture frame prop to use in pictures too.

Main Street was blocked off between Central Avenue and 14th Ave. for safety purposes. But the crowd of over 200 spilled over into other areas of downtown, visiting the shops holding open houses.

The chamber manned the hot chocolate bar with free cocoa with your choice of toppings. There was also free fudge samples at the bar.

Local favorite singing group, the Sonshiners, sang Christmas Carols leading up to the Christmas tree lighting. When Mayor Sikes turned on the lights, Kevin Hamilton and the Sonshiners led the crowd in singing “Jingle Bells” that made the night even more enchanting.

Magnolia Manor’s front lawn had a live nativity scene with Biblical characters in costumes and live animals. People were petting the animals and enjoying the nativity.

One couple and their daughter were enjoying the evening so much, they compared downtown Humboldt’s charm to a Hallmark nostalgic setting.

Saturday was all about the kids. In conjunction with Humboldt Plaza 3 and the chamber, there were six different showings of “The Grinch”. People contacted the chamber to reserve their seats for the free movie. All shows sold out in a matter of days. Concessions were available for purchase.

After the movie was over, there were very special guests awaiting the children—the Grinch himself and Mary Lou Who. There was a backdrop for taking pictures, along with a “Merry Grinchmas” frame prop and a candy cart where children selected their own candy.

All in all, it was a festive time in the Strawberry City. Everyone was in the Christmas spirit. Hats off to the Humboldt Chamber of Commerce, the businesses hosting open houses and everyone involved. After all, it is the “Most Wonderful Time of the Year” and Humboldt proved to be a magical place to be last week.